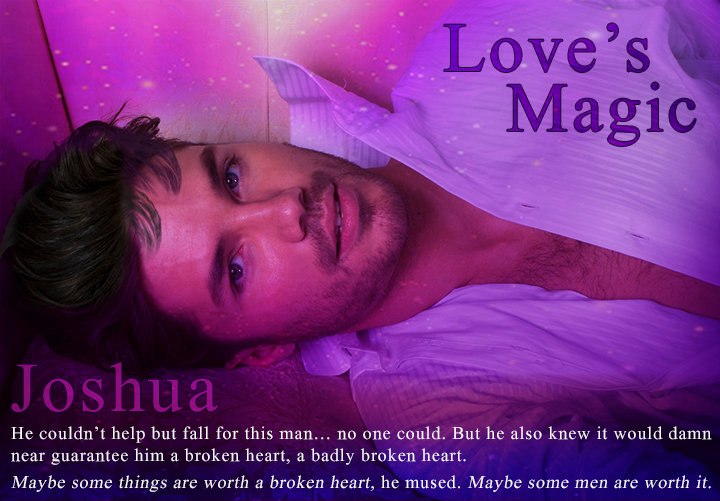 Joshua Abrams’s early years were something out of a nightmare. His alcoholic father treated him with abuse both physical and emotional until, when he was eight years old, his mother put out a warrant for the man’s arrest and he subsequently fled to Canada.

This heartbreaking beginning created a man who was frightened of love, reticent in relationships, even with his family, and inclined retreat from intimacy. His fear of abandonment and poor self-esteem was a stain on his heart that made trust nearly impossible and love difficult to accept.

Hoping to understand himself as well as help others, he pursued his career as a Doctor of Psychology (PsyD) with single minded determination, cutting himself off from family, friends, and from his Jewish heritage. Quiet, scholarly, and painfully shy in social situations, he found comfort in books and retreated to them whenever life became to real… too threatening.

His meeting with Colin Campbell, was a bolt of lightning to his heart. The dynamic Irish police officer was everything Joshua was not. Cocky and charismatic, he damn near dragged Joshua out of his shell and into a relationship which, as much as he longed for it, Joshua knew didn’t have a prayer. No one could tame the wild and independent Irishman. He’d made it perfectly clear that he didn’t ‘do relationships’.  But knowing that didn’t keep Joshua from falling hopelessly in love.

My heart ached for Joshua as he struggled to navigate the roiling waters of his relationship with Colin. He knew from the very beginning that ‘commitment’ was not a word that would ever be found in Colin’s vocabulary yet, in spite of this, his own heart was already given over to the handsome Irishman. This, for Joshua, was a journey without any destination other than heartbreak and I constantly tried to put myself in his shoes as he struggled to step away from his feelings for Colin.

Retreat was often Joshua’s default tactic when the fear of abandonment and betrayal loomed over relationships, and though it broke his heart to do it he began to back away, refusing Colin’s invitations, distancing himself from any contact other than necessary work-related meetings. And yet, even as he went through the motions of physically distancing himself from the charismatic Irishman, he knew that escaping from his feelings was impossible.

Joshua is a man who is very internally directed. He views everything through the lens of his own self-doubt. He looked at Colin with eyes which were wide-open and filled with a combination of awestruck adoration and utter terror. He knew this man was his weakness. He knew this was exactly the kind of man who most appealed to his reticent heart. And he knew that this was the kind of man who would never… could never… give him the kind of relationship he yearned to make part of his life.

And yet he couldn’t help but take the first tentative steps which swept Colin to the center of his life. Even the inevitable heartbreak couldn’t deter him. His overwhelming need to be close to Colin, even if the affair was short-lived, drove every other consideration from his mind.

And yet, his experience with Colin only served to reinforce his inner doubts and lack of faith in himself. Convinced by his childhood that he was unworthy of love, it took the greatest heartbreak of his life to prove just how wrong he had been all along.  Colin was his ‘Magic Man’, but the true magic only became apparent when their relationship lay irreversibly shattered at Joshua’s feet, leaving him with nothing but memories of the love which neither time nor distance could destroy. 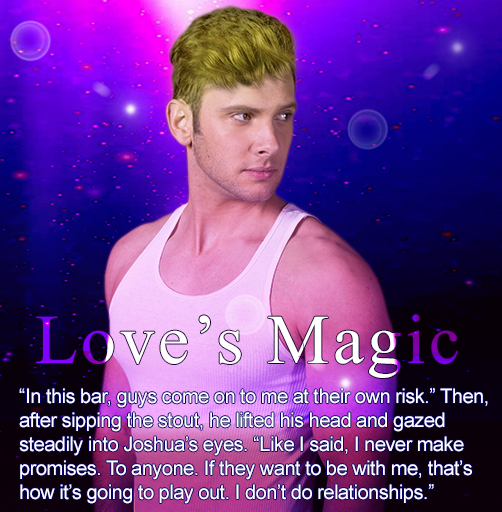