Which actor/actress would you like to see playing the lead character from your book?

Now I’m embarrassed. I always have an actual person’s face in mind for my characters. Always. And usually that face belongs to an actor or actress. It’s just easier for me to write when I can see the character living out what’s going on in my mind.

Colin, of course, was Irish. And I wanted him to look Irish. It’s a lot of who he is as a man and it was important to me that the character’s image in my mind convey the deep love he feels for being Irish. So, I went looking for Irish men. And this is who I chose: 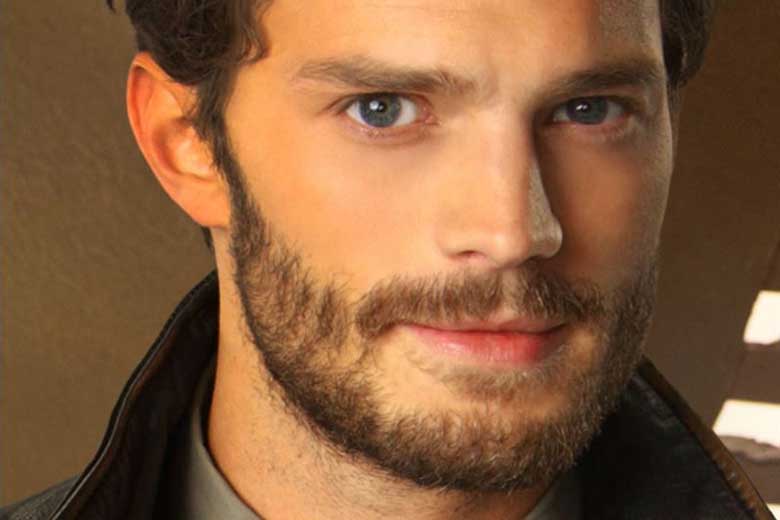 Kill me now! Yes. It’s Jamie Dornan. But… BUT… I honest-to-god had NO idea who he was when I picked the image. He just looked IRISH! I am no fan of Christian Grey, had never read 50 Shades of anything, have never seen the movies, had never seen Jamie in anything. He just looked… Irish!  And, of course, he looked hot as FUCK!

As Joshua said when he first saw Colin on hit motorcycle: “Colin sat astride the bike, his muscular frame wonderfully emphasized by his black leather jacket and tight jeans. In his hand was a helmet emblazoned with a shamrock and the words: ‘Go Irish!’ My God, Joshua thought, his breath catching in his chest. He’s just so fucking hot!”

I know now, of course. Trust me to pick the actor playing the most notorious heterosexual on the planet as the mental model for my gay-as-hell Irish cop.

But… once I saw him I was sunk. He just WAS Colin! So I’m stuck with Jamie Dornan… if such a thing is possible. And, frankly, the Jamie Dornan who was and remains ‘Colin’ in my fevered brain is Jamie as Sheriff Graham in ‘Once Upon a Time’. THAT’ is Colin to me.

Joshua. Again, I went on the hunt for an ethnic look. Joshua is Jewish. I needed a Jewish guy. And there he was. 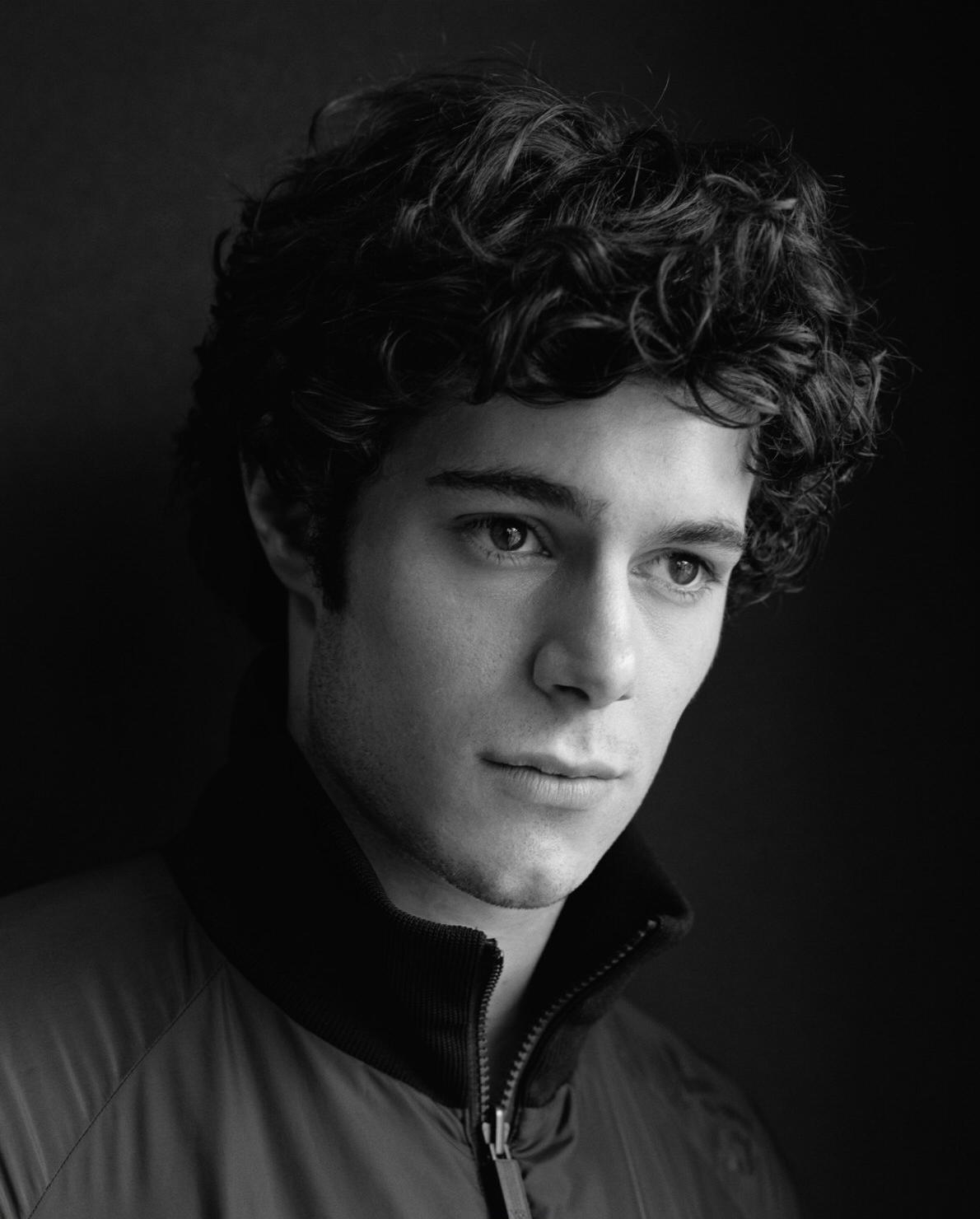 Again, I had no clue who Adam Brody was when I picked him. I had never seen the OC, didn’t know Adam from Adam in the garden of Eden. I just knew he was Joshua. There were the dark, tumbling curls that Colin drooled over. There was the Jewish strength and calm that he relied on.

In fact THIS is the picture that Colin was looking at when he thought: “Alone in his apartment at night, he studied the only picture he had of Joshua, clutching it tightly in one hand while holding his phone in the other. It was a black and white photo which Joshua had given to him some weeks ago. The photo was beautifully lit and the reflective expression on Joshua’s face framed by his dark, tumbling curls tore at Colin’s heart. He gazed past Colin with dreamy eyes which focused on some distant and unreachable goal.”

So those are the two guys I continually saw in my head as I wrote Love’s Magic. I have to confess… once I’d discovered Jamie Dornan (and I admit that I am really late to that party!) I knew Colin couldn’t have been anyone else. And frankly, having he and Adam firmly planted in my brain made writing Colin and Joshua’s romantic scenes a lot more pleasurable. I mean a LOT!

I often wonder if I’m the only author who uses uber-hot fantasy guys as her mental model when they write. Somehow I doubt it. 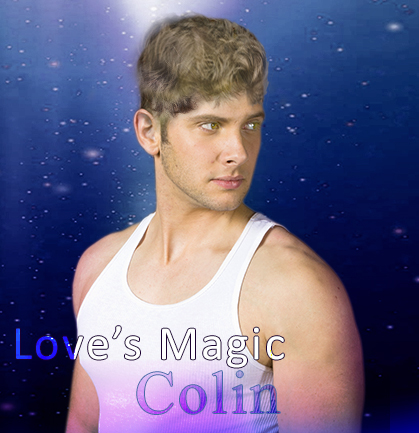 I’ve been asked which character in my story gave me fits or constantly surprised me by going in directions I hadn’t intended, and the answer to that question would have to be, Colin.

I adored that feisty Irishman from the moment he sprang, full grown, from my brain. Cocky, arrogant, and utterly contemptuous of romance in any form, he was a pistol from day-one.

He didn’t seem to GET that I wanted him to fall in love with Joshua. I tried to corral him, entice him, yank and pull him. But still he resisted. Every word I wrote to try to lead him down love’s rosy path ended up sounding hollow and dishonest. It wasn’t Colin’s voice and I knew it. I had to try again because what I’d written was just wrong.

I had to stop writing and listen to what my fiercely independent Irishman was trying to tell me. I had to stop putting words in his mouth and let him speak. And believe me when he did, he had a lot to say.

This was not a man who could easily admit to being afraid. After all he had a reputation to uphold and there’s nothing like Irish ego and pride to ignite feelings of self-preservation. Perhaps it’s not rhetoric to say that Colin was afraid to be afraid. His fears were not focused around one issue. Colin’s heart was a maze of complex questions all of which led back to one chilling answer and one horrifying childhood trauma.

He is not a one-dimensional character and at first I didn’t get that. His resistance to love and intimacy was multi-layered and breaking down one of those layers offered no guarantee that a completely different issue wouldn’t raise its head and slam the door to Colin’s heart shut tight.

I had to explore each layer side-by-side with my independent Irishman. I had to let him lead me down the paths where he feared to walk and understand why he feared to walk them. I discovered a complex, multi-dimensional man whose fears flowed from a deep well of memory, most of which had been bottled-up since childhood. I discovered that his fear of love, intimacy, and commitment came from a legitimate source. I discovered that I couldn’t force him to love. I had to step back and let Joshua lead him to Love’s Magic.

Once I took myself out of the equation and let Joshua take over, the process became easier. I didn’t have to lure, bait, or force Colin in Joshua’s direction. I just had to step back and let him choose to move in the direction he was dying to go.

Even then, it wasn’t an easy process for Joshua or for me. Colin remains frustrating, obstinate and fearful. But Joshua’s struggle to understand the man he loved revealed more about the soul of my complex Irish cop than I ever knew was there.

I hope you will walk beside Colin and Joshua on their journey. I hope you’ll cheer their victories and mourn their defeats as they struggle to find Love’s Magic.

One of the coolest plot ideas floating around in my brain is one I developed with my grandson, Brian, when I visited my daughter last Christmas. We talked about writing a Gay Sci-Fi novel which focuses on two individual beings, one an Earthling and the other a being named J’Sepp Eldan who comes from another (as yet unnamed) world.

J’Sepp’s world is highly advanced and could offer our planet fantastic new technologies which could eliminate disease, hunger, poverty. They also offer new insights and wisdom which could help Earth realize its full potential and become the paradise it was meant to be. Earth desperately needs this kind of radical change if the human population is to survive the effects of climate change and other self-destructive tendencies.

But before J’Sepp’s people can offer these healing gifts, J’Sepp must determine whether or not our people and his are compatible by experiencing ‘The Convergence’ with a citizen of our world. They must, in effect, become one soul. He has chosen our Earthling hero… who also does not yet have a name, as the most compatible human with which J’Sepp can reach convergence.

Our Earthling is flabbergasted by this proposal and unsure what it all means. He quickly discovers that he and J’Sepp must come to know and care about each other to the point where ‘The Convergence’ is possible. This involves both beings developing a deep understand of each other’s emotional, mental and spiritual character. They must explore each other’s minds, hearts, spirits, and bodies until they become so close that converging becomes a fact of life.

Without ‘The Convergence’, J’Sepp’s world cannot merge with ours and the human population of Earth would become extinct within a very short time.

The convergence itself is not merely a sexual joining although that is a big part of it. It involves coming to know and understand a completely ‘alien’ being at the deepest levels possible, to the point where both comprehend the many ways in which all living things are, in fact, One.

Those are the very dim outlines of what Brian and I sketched out. I think it would be very interesting to develop a character from a world which was totally different from an Earth, and attempt to find common ground and common understandings between their citizens and ours.

Who knows if it’ll ever go anywhere. But I find the idea fascinating and may try to develop it within the next year or so. Besides… won’t it be fun to write a Gay Sci-Fi novel with my grandson??

Love's Legacy, David and Nate's backstory is now available as a FREE online novel. Learn how these two dyamic men met and finlly found their happily ever after!
CLICK HERE TO READ AND DOWNLOAD LOVE'S LEGACY!