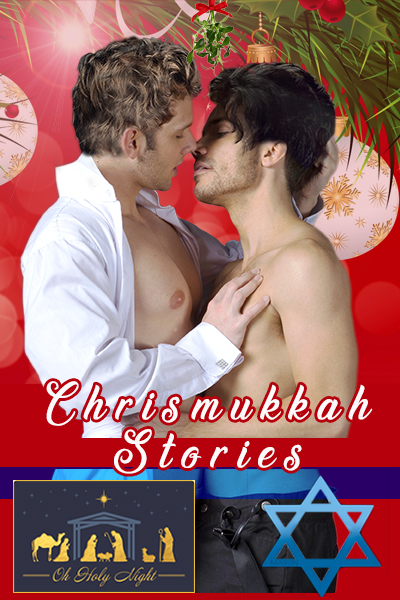 Colin stood beside their Christmas tree staring up at the star which adorned the top. His hands were shoved deep into the pockets of his jeans and his lower lip was caught between his teeth. The multicolored tree lights cast a radiant aura onto his face as he gazed, making it glow with an unearthly beauty. Joshua drew in a quick breath as he stood unnoticed in the dining room watching his husband. A year ago, he had carried that very star to their home, a gift from Colin’s mother. She had told him the story of how his father would lift Colin onto his shoulder to place that star atop their family tree. She had told him how much this moment meant to the youngster Colin was then and to the man he grew to become.

Colin turned aside. His head was low, and he huffed out an audible breath, his lips pressed into a thin line. He glanced up and spotted Joshua watching him, then tilted his head toward the tree. “Looks pretty.”

“Were you thinking about your dad?” Joshua asked.

Colin tilted his head as he approached, and his eyebrows lifted in a gesture which expressed both agreement and a hint of self-reproach. “I suppose,” he said. “It was always kind-of our moment, you know?” His head dropped once again. “Can’t help but think of him.” He stood for a moment staring down at the floor. “Wish I’d been a better son.”

“Colin, he’d be so proud of the man you’ve become,” Joshua said, laying a hand on Colin’s shoulder.

“Might mean more if he wasn’t dead,” Colin muttered, then glanced up at Joshua. “And please don’t tell me that he’s looking down from heaven all happy and proud.”

Joshua squeezed his shoulder and breathed out a soft laugh. “I wouldn’t do that.”

Colin leaned forward and pressed his forehead to Joshua’s. “Sorry,” he whispered. “I guess seeing the star threw me into a bout of self-pity.”

“It’s not self-pity,” Joshua said, his arms winding around Colin’s neck. “It’s regret. Every human being on the planet has them, Colin. We’re all imperfect, every single one of us. And if there was a way to put our lives on ‘rewind’ and undo those mistakes, would we really do it? The man you are now was molded and formed by everything you’ve experienced, including those moments you regret. They made you the man I fell in love with. They made you aware of how your behaviors and actions affect others. That awareness is a gift from your father. It’s a part of him that lives on in you. So, my advice is, every time you look at that star say ‘Thanks, dad’, and keep on walking. That’s all you can do. That’s all anyone can do.”

Colin laughed and rocked Joshua in his arms.

“It’s not just psycho-babble,” Joshua muttered. “I meant it.”

“I know,” Colin murmured, then captured Joshua’s chin in his hand and lifted his head. “And I’m grateful.” He kissed Joshua uplifted lips, then kissed them again. “You make me a better man,” he whispered.

“You make yourself a better man,” Joshua replied with a tart edge in his voice. “Me shooting off my mouth doesn’t mean shit if it falls on deaf ears.”

“It’s not every day that I admit to having imperfections,” Colin teased, nuzzling against Joshua’s neck. “So, do me a favor and keep my wimpy-assed confession to yourself.”

Joshua grinned and tilted his head toward the stairs.

“Oh, it’s like that is it!” Colin exclaimed laughing. He captured Joshua’s hand and tugged him toward the steps, and their bedroom beyond. “That’s one price I’m always happy to pay.” As they passed the tree, Colin threw it a salute. “Thanks, dad. Nollaig shone dhuit.” (Happy Christmas)