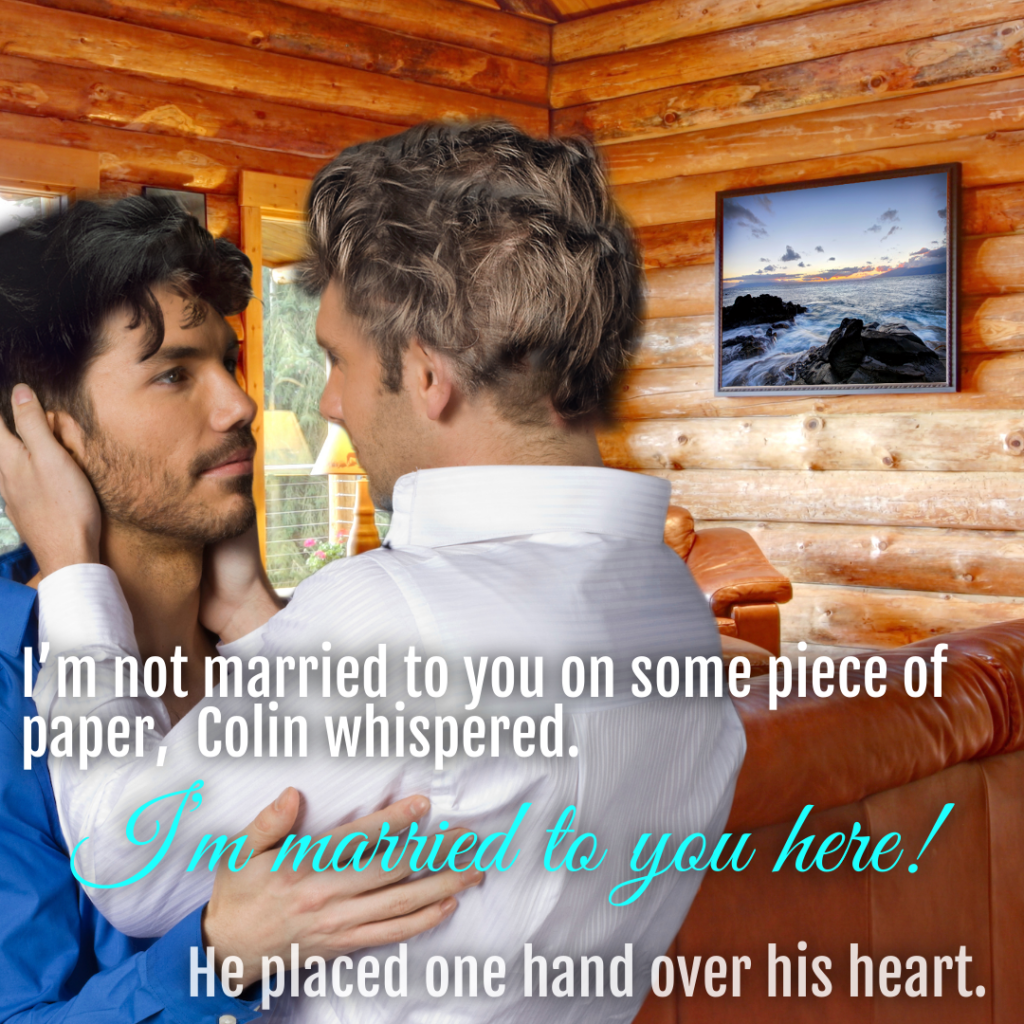 Scowling, Colin snatched up the TV remote and hit the power button. “Stop watching MSNBC! You know that crap just gets you upset.” He husked out a heavy sign and tossed the remote onto the coffee table.

Joshua sighed and flopped back against the couch. “I know.”

“Just sitting here, I can see your angst and depression growing. It’s palpable, Josh. Don’t do that to yourself! It’s bad for you. It’s bad for me. It’s bad for us!” He fell onto the couch next to Joshua and turned to face him. “Stop!”

“Wow! And now for something completely different. You saying this to me!”

“I know, babe,” Joshua replied, then sighed. “I’m worried about that new justice that Trump put on the court,” Joshua mumbled. “It scares me. She hates the very idea of gay marriage.” He turned to Colin and lifted a hand to caress his face. “It scares me,” he repeated, his voice soft.

“Why?” Colin asked. He pressed Joshua’s hand to his cheek, then turned his head and kissed the palm. “You think she could get them to overturn the ‘marriage equality act’?”

“The conservatives have a majority now,” Joshua replied. “They could do it.”

Colin leaned back and laughed out loud. “Bullshit!” he spouted, then turned back to face Joshua. “First off, if Biden wins, they’ll never, ever get away with it. He won’t let it happen. Second, even if it did happen… who cares?”

“Josh, I mean it. I don’t give a flying fuck what some politician in DC says. Couldn’t fucking care less!”

Joshua shook his head. “Colin, they could mess up our life.”

Joshua tried to speak but couldn’t. Overcome with emotion he lowered his head, feeling his eyes fill with scalding tears. But Colin wouldn’t have it. His hand cupped Joshua’s chin and lifted his head until their eyes met, Joshua’s now overflowing.

Joshua fell forward into his arms, clutching his sweatshirt with both fists. “God, Colin,” he moaned, choked by tears. For several minutes they sat together in silence, holding each other close. Then Joshua lifted his head and swiped a hand over his tear-streaked face. “You are so wonderful. It’s no damn wonder I fall more in love with you every single day.”

“Mm,” Colin hummed in soft appreciation. “Just imagine how much you’ll love me in twenty years.” He grinned and kissed Joshua, sliding his thumb over the soft skin under Joshua’s eye, wiping away the last remnants of dampness. “It’s terrifying.”

“Not to me,” Joshua whispered, both arms tight around Colin’s neck. He drew in a deep breath. “Thank you, my yedid,” he whispered, using the Hebrew word for beloved. “No matter what the world hands to us, you always find a way to make me feel safe.”

“And I always will,” Colin murmured. “Now think of something we can watch that’ll make us smile!”

Colin barked out a laugh. “Perfect!! I’ll find the DVD. You go make some popcorn.”

Joshua caught his hand as he rose. “One more kiss first?”

Colin bent over him and kissed him tenderly, then kissed him again. “Always time for one more kiss.”

“Deadpool,” Colin said, tilting his head in the direction of their DVD collection.

“Popcorn,” Joshua replied, rising and moving toward the kitchen.

Colin pursed his lips and followed Joshua with his eyes, then shook his head and moved toward the DVD’s. He felt resolve tighten his chest. “Always keep him safe,” he muttered as he flipped through the DVD’s. “Always.”