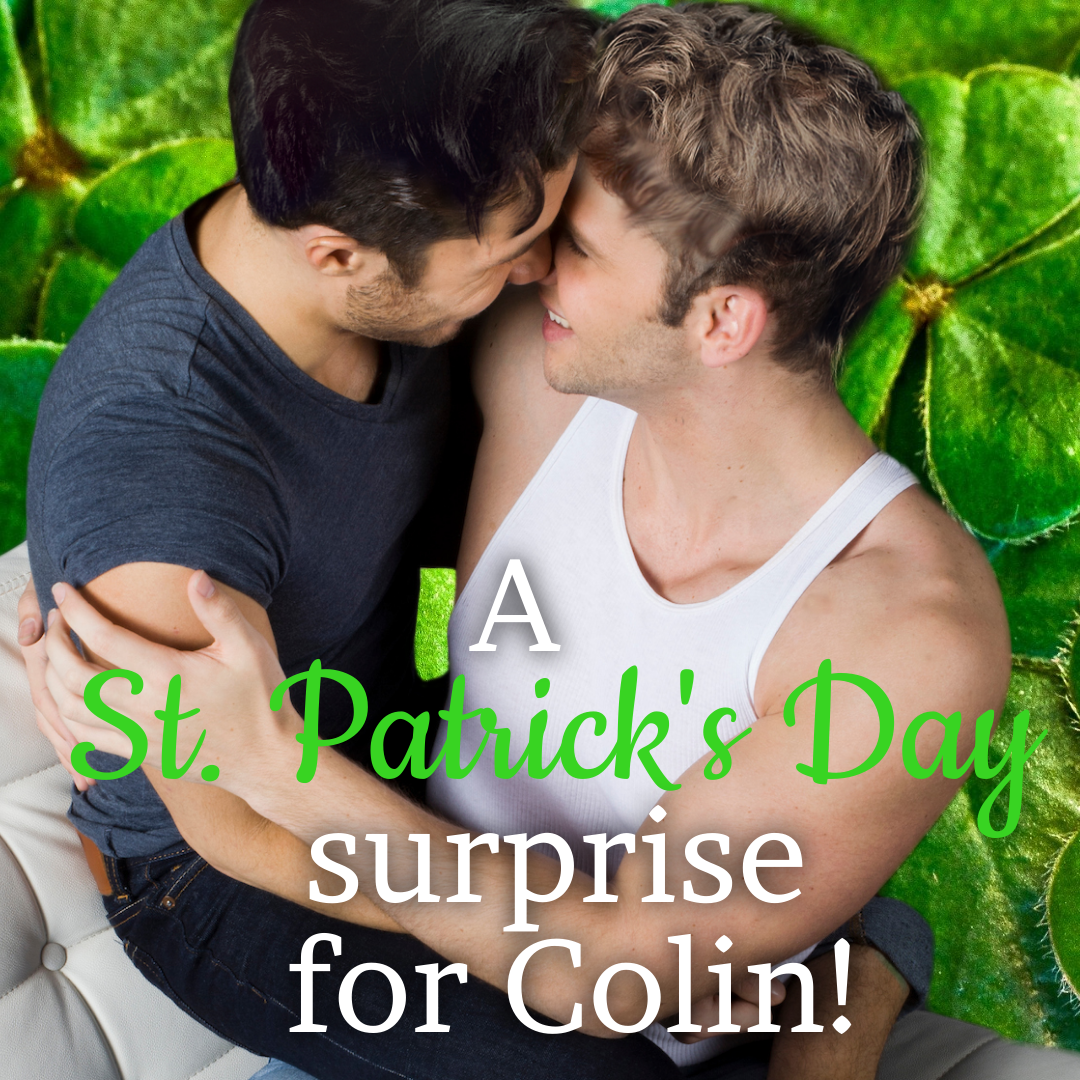 St. Patrick’s Day was only four days away and Joshua was scrabbling to come up with an idea that would make the day extra special for his uber-Irish husband. He’d already bought him a card and a beautiful Celtic Knot T-shirt. But Colin already had a closet full of Irish T-shirts, sweatshirts and hoodies so all this would do is add to the collection.

“It needs to be something special,” Joshua muttered. “Something unusual. Something just for him that no one else has ever come up with.” Google searches provided no real help. Most of the suggestions he found there focused on St. Patrick’s Day treats for children. And while Joshua would be the first to admit that his husband could throw inhibition to the wind and embrace his inner child at the drop of a hat, the suggestions still weren’t a good fit.

“Nate, help me think of a way to surprise Colin on St. Patrick’s Day,” he implored the next day at lunch. “I’m drawing a blank.”

“Well,” Nate mused aloud, “I’m not all that well versed on St. Patrick’s Day rituals, but I know there are some! What goes with that goofy holiday?”

“Oh god, don’t go there!” Nate urged, laughing. “You know he hates them!” He wrinkled his nose in thought. “What about the color green?”

“Paint your house green,” Nate suggested, grinning. “Or better yet, paint yourself green!”

“And let him lick it off?” Nate inquired, then bent over laughing. “Oh, man, that is one amazing image. You, painted green and totally naked, and Colin lapping it off like it’s ice cream.” Nate snapped his fingers. “Better yet, cover yourself in mint ice cream!! Wow! Both Irish and hot!”

“Tempting though that thought might be, it would also be pretty damned cold.” He cocked an eye at Nate. “But the whole idea of green food would appeal to the Irish in him and the food lover as well.”

“Throw some green food coloring into his oatmeal,” Nate offered with a wink.

“I think I can get more inventive than that,” Joshua replied. “But I don’t have much time and I have a bit of research to do.”

Within days Joshua had his St Patrick’s Day menu completed. Breakfast would consist of healthy matcha green tea pancakes covered in whipped cream and strawberries and served with a sweet green-apple juice. Lunch would be a glorious green sandwich filled with green hummus, avocado, sliced cucumber, and goat cheese served up with a green Bloody Mary. Dinner would, of course, be corned beef and cabbage but Joshua would include as many green elements as possible, including a luscious green dessert made with Oreo cookies and mint pudding, topped off by a tall, green Murphy’s Irish stout. Green candy and cookies would be spread all over the house.

He studied his ingredients with satisfaction, but something still wasn’t right. He needed something more. He’d done green food for Colin every St. Patrick’s Day they’d spent together. Gotten him green cookies and candy and created the green beer. None of this was new. He’d done all of it before, though perhaps not to this extent. “Dammit, I need to think of something different.”

It was the day before St. Patrick’s Day and he still hadn’t come up with a brand-new idea. Desperate, he searched the web for hours, and at long last found the concept he’d been looking for.

On St. Patrick’s Day, Colin sat at their dining room table, munching on his green tea pancakes, praising Joshua to the skies. “So good, Josh!” he mumbled around a mouthful of pancake and whipped cream.

Joshua grinned at him, then rose. “I have something else to give you this morning,” he said, moving into the dining room. “Stay here. I’ll be right back.”

Colin heard him open and close the hall closet and detected the rustle of paper. He leaned back in his chair, craning his neck, trying to see Joshua from his seat in the dining room, then watched as he entered with something held behind his back.

“I made this for you,” Joshua said. From behind him, he drew out a large, green piece of poster board. Joshua turned it to face him, and Colin could see that it was cut in the shape of a Shamrock, with all three leaves folded inward.

“What is…,” Colin began, but Joshua raised his hand to stop him.

“Unfold the leaves one at a time,” he instructed, stepping close enough for Colin to touch the poster.

Colin smiled up at him. “Baby, that’s so sweet! Thank you. I’m lucky for the same reason.”

“Because you have you?” Joshua teased with a grin. “Unfold the next leaf.”

Colin reached to unfold the next leaf which read: “… you’re healthy and strong.” He smiled up at Joshua. “I wish this damned thing had more leaves!”

Joshua laughed. “Me too. It was hard sticking to only three reasons.” He nodded toward the last leaf and Colin reached to unfold it.

It read: “… my husband is the most wonderful man alive.”

Colin gazed at the now unfolded shamrock and nodded. “I want to hang that in the bedroom,” he said, then quickly glanced up at Joshua. “You’re still fixing corned beef and cabbage, aren’t you?”

Joshua laughed. “Of course, I am!”

“Good! I thought maybe this was my only St. Patrick’s Day gift.” He winked at Joshua and rose and took the shamrock from Joshua’s hands, placing it on their coffee table.

“The bedroom?” Joshua asked with a grin. “Won’t go with our decor.”

Colin strode to where he stood and wrapped both arms around his waist. “OK, then. I’ll hang it in my workout room. I can look at it when I’m doing reps and be inspired by your love.” He kissed Joshua tenderly, then rocked him in his arms. “I’d need a million leaves to tell you all the reasons I’m lucky to have you, Josh.” He leaned back and gazed into Joshua’s chocolate-brown eyes. “Thank you, baby. That’s the best St. Patrick’s Day gift I’ve ever gotten.” He kissed Joshua again, then looked around. “OK. Where’s the cookies and green candy?”

Joshua laughed and turned away from their embrace, moving once again toward the hall closet. “Comin’ up!”