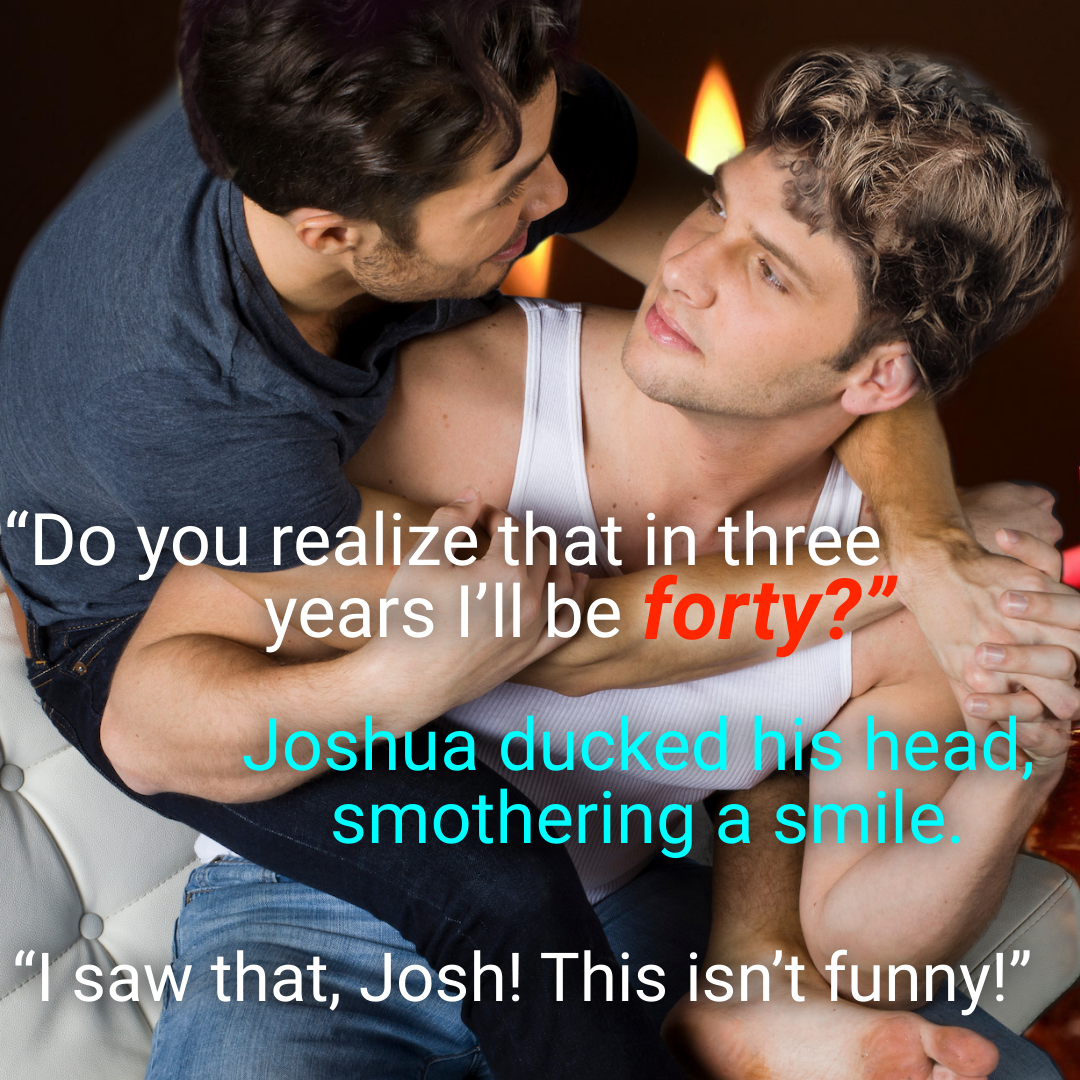 Getting Older by the Minute – A story for Colin’s Birthday!

Colin stumbled to the breakfast table and fell into his chair. He drew in a deep breath and stared straight ahead, his face contorted in a scowl.

“Morning, darlin’,” Joshua said in greeting, setting a filled coffee mug in front of him. “First off, happy birthday!” He bent and kissed Colin’s cheek. “And second off, why such a sourpuss?”

“I’m thirty-seven!” Colin told him, staring at his coffee mug. “What’s to be happy about?”

“What is this?” Joshua queried, plopping down next to his husband. “Well, for openers, you could be happy about the fact that you’ve lived for thirty-seven years and are still going strong!”

Colin’s scowl deepened, and he shot Joshua a look. “Do you realize that in three years I’ll be forty?”

Joshua held his thumb and index finger a short distance apart and arched his eyebrows.

“Honey, c’mon,” Joshua soothed, reaching to stroke Colin’s arm. “Don’t be like that. I want you to enjoy your birthday.”

“Mm,” Colin grumbled. “What’s to enjoy? Getting older by the minute?”

For a moment Joshua sat in silence, then he shot to his feet. “Goddammit, Colin! Don’t be like this! It’s vain and…and…selfish.”

“Yes! Vain!” He walked to the sink and paused for a moment, staring out the window. Then he turned to face his husband, who had spun in his chair to look at him. “No one on this planet has less reason to bitch about birthdays than you do.”

“Yes, that’s so!” Joshua snapped. He strode to Colin’s side and gripped his shoulder. “Listen to me! When you were shot, I sat beside you for hour after endless fucking hour hoping and praying to every god I knew that you’d GET another birthday! Don’t you dare dishonor those prayers by not being grateful for your life.”

“How dare you, Colin!” Joshua told him, his voice shaking with tears. “How dare you be in a pissy mood because you’ve lived another year! I—I just…” His voice trailed off and he wheeled away. “Forget it,” he muttered, waving his hand in dismissal. “Just forget it.” He stalked into the living room calling over his shoulder: “Happy birthday, asshat!”

“Oh, fuck me!” Colin moaned. He rolled his eyes and heaved a huge sigh, then struggled to his feet and followed his husband into the living room. “Josh…” he began.

“Don’t talk to me!” Joshua snapped, his voice thick and shaking.

“Because it’s my birthday!”

Joshua husked out a scornful breath and fell onto the couch. “Fat lot you care! All you want to do is whine because you didn’t DIE last year and spare yourself the trouble of turning thirty-seven!”

“Honey, I’m sorry,” Colin said. He sat down on the couch beside his husband and laid a hand on his arm. “I apologize. I do. And you’re right. It was vanity.”

“Damn right it was!”

“I admit it,” Colin told him. “Fact is, I’ve been thinking about it for days. Feeling down. Thinking that I’m getting older, thinking about all the things I wanted to do that I’ll never get to do…” Colin shrugged. “It put me in a pissy mood.”

“What do you want to do that you can’t do?” Joshua challenged.

Colin shot him a hangdog look through lowered lashes. “Play first base.”

“You can play! Trent said you could play this year if you wanted to.”

“I’ll never be as good as I used to be out there, Josh. I don’t have the same dexterity I had before I was shot. I’d be a piss-poor first baseman, a shadow of what I once was. That—that just won’t work for me.”

“You can’t be a superstar, so you’d rather not play at ALL?”

“It’s how I feel, Josh.” He gazed at Joshua, his honeyed-green eyes clouded with pain.

Joshua winced and nodded, beginning to regret his earlier outburst. “I get it, Colin. I do. What else, baby? What else can’t you do?”

“I thought you loved being an attorney!”

“I do!” Colin said. “I love my career. But I also loved being a cop and…and well, I just fucking hate it that I was forced out before my time.” He shrugged and met Joshua’s eyes. “I could have made captain, you know.”

Colin leaned back on the couch. “So, I guess my birthday just got me taking stock a little bit.”

“Well,” Joshua said, stroking Colin’s cheek, “that IS what they’re for.”

“And I just felt a bit like,” he wrinkled his nose and shrugged again “like, well…you know… like I’m getting older. Like…life was getting away from me.”

Joshua nodded and leaned against Colin’s arm. “Sweetheart, I want to apologize for snapping at you. Birthday blues is actually a pretty common phenomenon.” He leaned back and met Colin’s eyes. “I guess your birthday means so much to me that I didn’t stop to think about what it might mean to you.” He kissed Colin’s cheek then cradled it in his hand. “I’m sorry, my love. I was wrong. It just hurt my feelings because I put so much into planning for today. We don’t have to celebrate if you don’t want to. Or we can keep the celebration really low-key. Whatever you want, baby.”

“Oh? Do you plan to send my mother home when she gets here?”

Joshua reared back, eyes wide. “How did you know she was coming?! That’s supposed to be a surprise!”

He shot his husband an annoyed glance. “Goddammit, Colin!”

“Well, you left the receipt for their tickets lying on the dining room table,” Colin said. He shrugged and grinned. “I’m a cop. I’m trained to spot clues—especially when they’re two inches from my face.”

“It was lying there, Josh! I didn’t sneak into your desk and find it hidden under a pile of papers. It was lying in plain view right on the dining room table!”

Joshua’s frown was so comical that Colin burst into laughter.

“And I want to apologize too,” Colin said. He wrapped an arm around Joshua and snuggled him close. “I forget, at times, what you went through when I was shot. And I shouldn’t, because I remember the agony I went through when you were missing.” He pressed a kiss to Joshua’s temple. “So, you’re right. I should stop whining because I might have a gray hair or two and start showing a bit more gratitude that we both get to have birthdays and grow old together.”

“You found a gray hair?”

Joshua began to examine Colin’s hair, carding the sandy locks through his fingers. “Where? Did you pull them out? I don’t see any gray!”

“You’re looking in the wrong place.”

“Well, what kind of hair was it?” He pulled Colin’s T-shirt down and began to examine his chest.

“Well for fuck’s sake, WHERE?” Joshua blurted out

Colin arched his brows and tilted his head towards his crotch.

For a long moment they stared into each other’s eyes, then both burst into peals of uncontrollable laughter.

“Oh my god, I can’t believe you!” Joshua choked out between bursts of mirth. “So, you found a gray pube hair, and it hurled you into the valley of darkness?”

“I know! I know!” Colin said, clutching Joshua’s arm as he laughed.

After a moment Joshua got himself under control. He turned to his husband and grabbed both his arms. “Colin Michael Campbell-Abrams, are you going to stop being a complete dick and celebrate your birthday with me like the happy Irish leprechaun you are? Or do I have to kick your Irish ass!”

“You know I HATE leprechauns!”

“I don’t care. I want your promise that you’re going to do cartwheels of happiness all day today because you turned thirty-seven!”

Colin lifted his hand as if taking an oath, forcing his face into a somber expression. “Iffy on the cartwheels, but other than that, I so swear.”

“And do you swear or affirm that you’ll eat cake, blow out candles, sing songs, entertain our mothers, and accept your birthday gifts with all the Irish good humor that resides within you!”

“I so swear—especially about the cake.”

“Hey! You can’t talk to me like that! I’m the birthday boy!”

“I know, my darling,” Joshua whispered, winding both arms around Colin’s neck. He kissed his husband, then kissed him again. “Happy birthday, Colin. And I hope you’re still alive and kicking and being a grump about it when you turn one hundred.”

“Me too!” Colin said. He gave Joshua a quick kiss, then got to his feet. “I’m gonna get dressed. Then we’re going to take me out for a birthday breakfast.”

“And I suppose I have to PAY,” Joshua grumped.

“You’re goddamn right you do,” Colin told him with a grin. “I mean, after all, Josh! It’s my BIRTHDAY!”