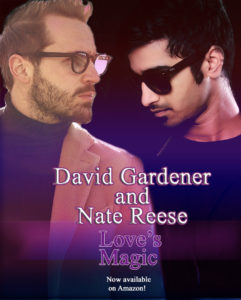 David Gardener, Professor of Revolutionary War History at the University of Virginia for over twelve years is beloved by students, admired by faculty, and sought out by university administrators. He has moved past the pain of a cold and critical father and his own fears about his sexual identity to become one of the most popular figures on campus.

Before meeting Nate, David avoided romance, building his life has around his two daughters and his successful career. A quiet and unassuming man who loved his garden and kept to himself, David had learned to live with loneliness.

But the beautiful and talented Nate Reese awakened the long-buried spark of attraction with frightening force. David’s yearning to form a relationship with the young associate producer was matched only by his fear what this new attraction might do to his now-settled life.

But Nate possessed the kind of open and loving heart that David instinctively knew could lead him to healing and peace. Struggling to find a way to safely connect to Nate, David is repeatedly torn between the safety of solitude and the frightening thought of embracing his needs in spite of the potentially threatening consequences. Eventually though, he begs Nate to take a position at the University of Virginia and Nate happily agrees.

Their differences resolved and more in love than ever, they embark on their life together only to have their new-found happiness threatened by forces almost beyond their control. Nate’s traumatic encounter with a knife blade during an on-campus assault moves him to a position of leadership in an activist movement called ‘End Assault’.

David is devastated by Nate’s attack, but can only see disaster for his career if he pursues this militant course. Frightened of the potential consequences he is reluctant to support Nate’s efforts while Nate, feeling abandoned by his partner, sees David’s aversion to his involvement as indifference to the trauma he suffered.

Both men have valid points of view, but peace between them will require one of them to care more about being happy than he does about being right. Will the love they share be enough to see them through the complex and divisive issues with threaten not only their relationship, but the university they both love? Read Love’s Magic and find out!!