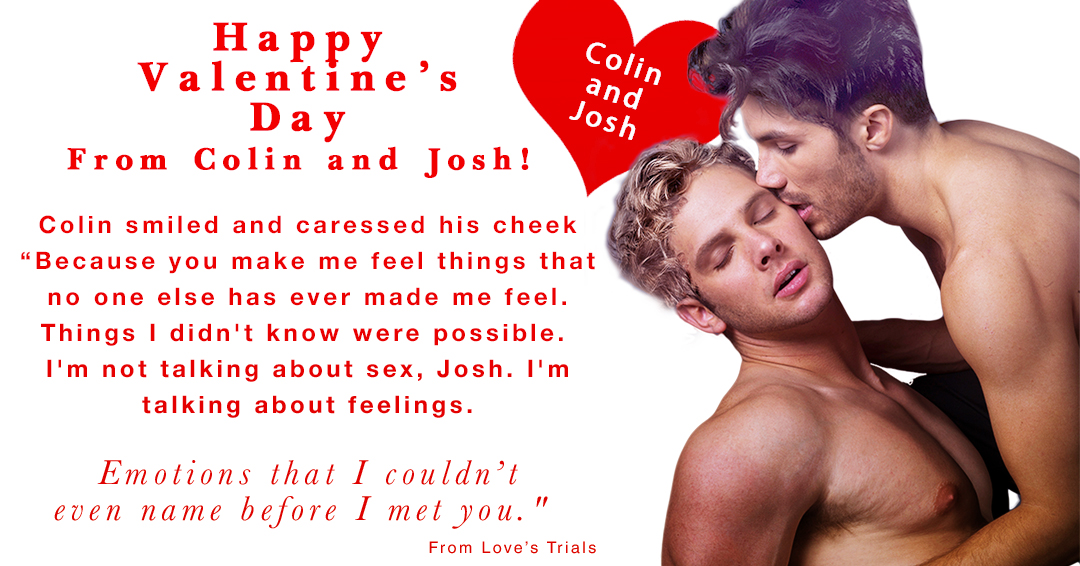 Joshua Campbell-Abrams moaned out a soft breath, stirring in the comfort of their warm, cozy bed, reluctant to leave it and start his day. Eyes still closed he turned to his side and stretched out a hand, expecting to touch Colin’s solid, muscular frame, but instead his hands found nothing.

Opening his eyes, he saw one red-wrapped candy heart lying on the bed beside him in Colin’s accustomed place. He snatched it up, chuckling. “What’s he up to?” he wondered, swinging his legs over the side of the bed.

“Colin!” he called, as he wandered to the bathroom. “You here?” At the bathroom door he peered down the stairs but saw nothing. “Colin!” he called again, but silence was his only reply. He sighed and entered the bathroom, then burst into laughter. Taped to the mirror was a huge, red, paper heart and on it the words “Be mine!” had been written in Colin’s distinctive scrawl.

After using the bathroom, he moved down the stairs, still seeing no sign of his husband. Sitting at center of their dining room table was a beautiful arrangement of red roses. “Oh, Colin,” he whispered. The card attached to the flowers read: “We will last forever. I love you.” Joshua pressed the card to his lips, his breath catching in his chest with remembered joy. “We Will Last Forever was the song to which they had walked down the aisle on their wedding day, and it would always hold a treasured place in Joshua’s heart.

Holding the card and the candy heart he glanced around. On the coffee table in front of their couch was a heart-shaped box of candy and a card. He sat on the couch and opened both. Inside the card Colin had written: “Timeless. Priceless. Endless. Those are the words that best describe my love for you. Happy Valentine’s day, A thaisce. I love you with all my Irish heart.”

Joshua bowed his head and pressed the scrawled message to his lips, then drew in a shaky breath and looked around. “Colin?” he called. “Where the hell are you?”

“You lookin’ for me?” Colin said, strolling in from the kitchen a wide grin plastered on his handsome Irish face. “I was out back on my machines.”

Joshua gestured to the flowers, the candy, shaking his head, his eyebrows arched. “I’m – I’m speechless.” He got to his feet and walked into Colin’s arms, his own arms winding around Colin’s neck. “Thank you,” he whispered. “Your card and candy and gift are still hidden upstairs.” He leaned back and grimaced. “But I didn’t get your flowers yet. I was going to do that later today.”

“Ahhh, skip it,” Colin growled out, nuzzling Joshua’s cheek. “I’ll share yours. It already smells like a funeral home in here.”

Joshua snickered and pressed his face against Colin’s neck, holding him tight. “Let me go get your gifts and card,” he murmured. 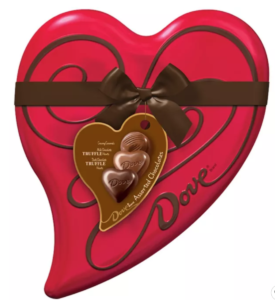 “I’ve already got the gift I really want,” Colin said, rocking Joshua against his body before kissing him tenderly. “But… if you insist.” He released Joshua and plopped onto the couch. “I’m opening your candy!” he called as Joshua disappeared at the top of the steps.

“I bet you bought your favorite kind!” Echoed down the stairwell causing Colin to snicker and nod.

“You’re damned right I did.” Colin muttered, yanking the cellophane off the heart-shaped box of ‘Dove’s Assorted Chocolates’.

He heard Joshua above his head, moving around in the bedroom, then opening the sliding panel to their small attic. “Damn!” Colin muttered, his mouth full of chocolate. “I didn’t think to look there!”

“Close your eyes!” Joshua called down the stairwell. “And no cheating!”

Colin leaned back on the couch, still chewing, and put a hand over his eyes. “Not looking!” He called, then heard Joshua coming down the stairs.

“Keep those eyes shut!” Joshua said, and Colin heard him moving objects about on the coffee table, clearly arranging them to his liking. “OK,” he said finally. “You can look.” 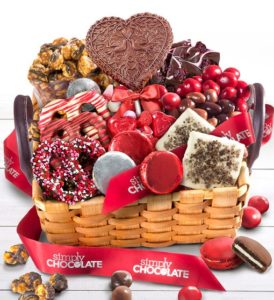 Colin opened his eyes, then widened them in amazement. “Wow!” he said, leaning forward.

“All from Ireland,” Joshua said, sitting down next to him, reaching into the box of Dove’s chocolates to grab his own morsel.

“Josh this is gorgeous!” Colin breathed out. “I’ve never seen this much candy in one place before!”

Joshua laughed. “And it’s Irish candy!” he added, nudging Colin with an elbow.

“And what’s this?” Colin asked, picking up a gift-wrapped box.

“Hand made in Ireland,” Joshua mumbled around a mouthful of chocolate. “Your mom helped me find the Irish lady who makes them.” 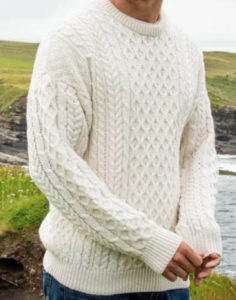 Colin held it up before his eyes. “Jesus! It’s incredible!”

“You’ll look amazing in it. Now open your card.”

In Colin’s Valentine card, Joshua offered a touching tribute to their marriage. “I’ve fallen in love many, many times in my life, Colin. But always, always, always with just one person – you. Thank you for being my best dream, my best gift, and my best friend. I adore you.”

“Josh,” Colin whispered, then turned to kiss him. “Thank you, sweetheart. My gift to you isn’t nearly as spectacular.” He reached under the box of chocolates and pulled out an envelope which he handed to Joshua.

Inside the envelope was a brochure for ‘Inn at Perry Cabin’ and reservations for a long weekend. “It’s on Chesapeake Bay,” Colin told him, pointing to the brochure, reading over his shoulder. “I got us a suite with view of the water.”

“Oh, Colin,” Joshua whispered, turning the pages. “It’s so beautiful!” He turned to his husband. “You got us a suite?”

“Nothing but the best, bud,” Colin said, nuzzling against his cheek. “The reservations are for this weekend, so I hope you didn’t have plans made.”

“None that I wouldn’t cancel to have this!” Joshua said, still peering at brochure. He laid the papers on the table and turned to face his husband. “Thank you,” he whispered, reaching to caress Colin’s cheek.

“Thank you,” Colin replied. He kissed Joshua tenderly, then stood and drew him to his feet. “Da-da-da-da-da-daaa,” he hummed, pulling Joshua into his arms, swaying with him in time to the song he began to croon.

Joshua felt his eyes burn with tears. No song meant more. No song could ever mean as much. And he tightened his arms around Colin’s neck as they danced to Colin’s lovely voice softly singing in his ear: “We can last forever….”

Joshua blotted his tears on Colin’s T-shirt then leaned back to gaze into his eyes.

And their arms closed tight around each other as their dance continued.