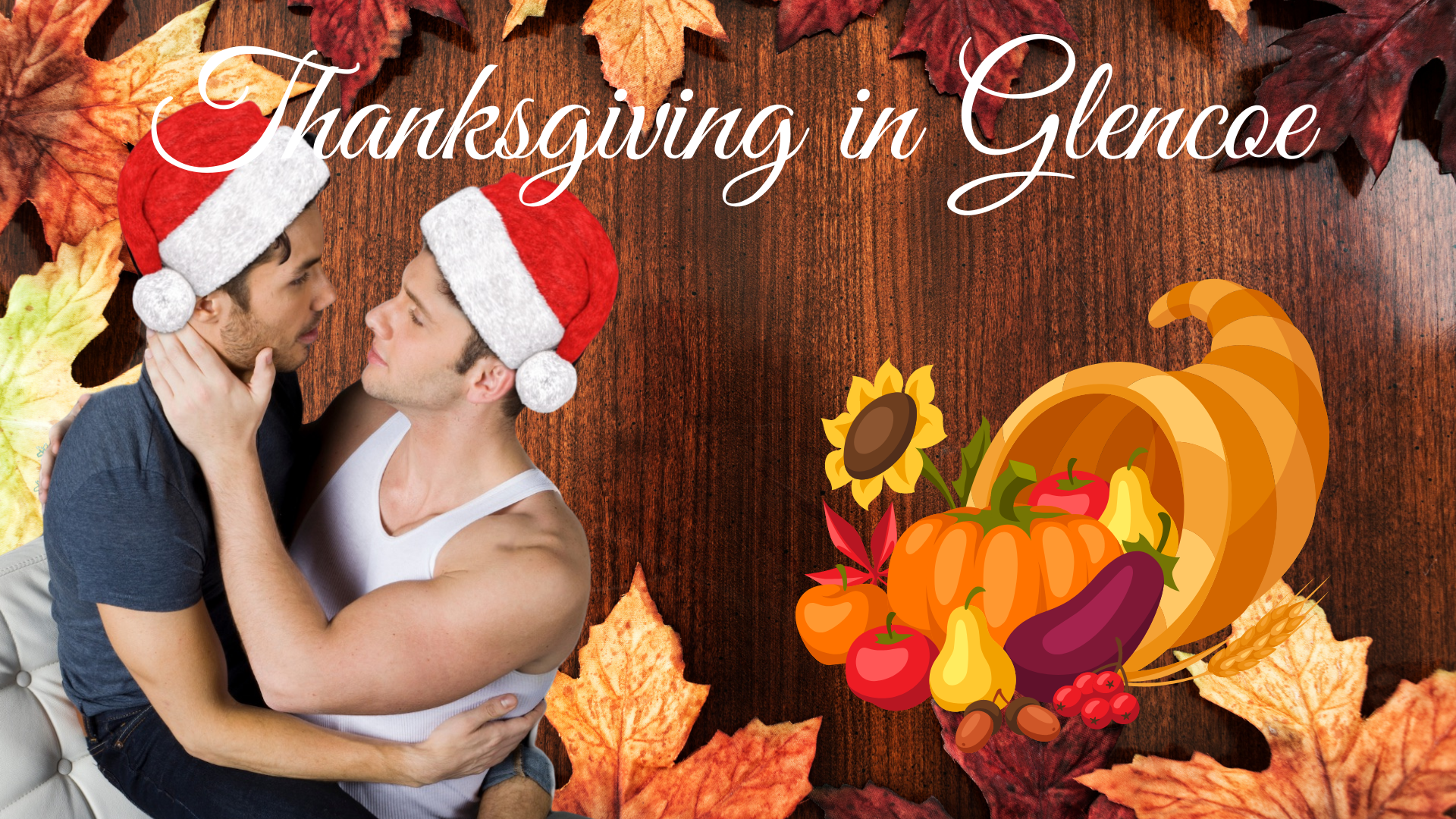 It was Thanksgiving in Glencoe, Illinois. Colin and Joshua, along with Colin’s mother, Brianna, had joined Bracha and Abel Abrams to celebrate the holiday. It had been Colin’s idea to bring the two families together this year, his first Thanksgiving with Joshua as a married couple.

The Thanksgiving meal had been cooked by Jessica Hansen, housekeeper and friend to the Abrams family since Joshua was a child. She was joined in the kitchen by both Brianna Campbell and Bracha Abrams who each added their own individual touches to the meal. After the food had been laid out, Colin pulled Jessica into a chair. “Hush!” he said, waving away her protests. “You’re eating with us!”

He stood for a long time, gazing around the table at the people surrounding him, then lifted his glass of wine. “Happy Thanksgiving,” he said. All at the table echoed his gesture, then Colin drew in a deep breath and glanced down at Joshua who was gazing up at him, his chocolate-brown eyes glowing. Colin passed his hand down the back of Joshua’s head, caressing the dark curls he loved then, once again glanced around the table.

“After my sister died,” he said, “I sort of withdrew into myself.” He winked at his mother. “Mom can tell you. I wasn’t the most attentive of sons.”

Brianna Campbell dismissed his comment with a wave. “You’re a fine son and always have been.”

Colin smiled and shook his head. “She’s biased,” he told the group, then reached to take Joshua’s hand. “Today I want – I need – to tell all of you that since Josh came into my life my heart has opened again. Not just to him… though that would have been enough. But to all of you as well. I have a new, and deeper connection to my mother. I have a whole new family who I love with all my Irish heart. And most of all, the most wonderful man who ever lived has agreed to be my husband.” He lifted Joshua’s hand to his lips and kissed it. “How could I be more blessed? he continued. “And on this day, it’s so damned important to me that all of you know what I’m most grateful for in life… and it’s all of you.” He moved his hand, encompassing the entire table, then he bent and kissed Joshua. “Especially you,” he whispered.

Colin’s mother clinked her spoon on her wine glass and stood. “My turn,” she said, her voice thick with tears. “On this day of Thanksgiving I am most grateful to this family,” and here she indicated Bracha and Abel Abrams. “This family who gave me this young man,” and here she lifted her glass to Joshua, who sat with Colin’s arm wrapped around him, gazing up at her. “Joshua, my son walked in darkness until your love lifted him into the light. He could have died, but your love and devotion held him close and kept him safe. I’m grateful to the family who raised you. And I’m forever grateful to you for returning my son to me.”

Joshua moved to Brianna’s side and hugged her tight, struggling to choke back his tears. “Thank you,” he whispered. “Thank you, mom.” He drew in a wavering breath. “He’s my whole life.”

“That I know,” Brianna whispered in return. “And he knows too.” Then she turned and shot a fake glare at Colin. “Or he’d better know!”

“He knows!” Colin said, raising his hands to defend himself. “Believe me, he knows!”

“My turn now,” Bracha Abrams said, rising to her feet with her wineglass in her hand. “First, I want to say Happy Thanksgiving to our entire family, including YOU, Miss Jessica!” Bracha sipped her wine then turned to face Colin. “As your mother thanked my son, I now have to thank hers.” She drew in a quick breath. “Joshua also walked in darkness,” she said. “He suffered terribly in his childhood and because of that he withdrew from life and from his family for many years.” She swiped a hand across her face to wipe away her tears. “I missed him more than words could say.” She shot a quick glance at Able. “We both did.”

“Amen to that,” Abel added.

“But when you came into his life, Colin, he came back to us. Your love for him and his love for you opened his heart and helped to heal his pain. And now I not only have my son again, but I have a new and wonderful son to fill our home and our hearts.” She lifted her glass to Colin. “Thank you,” she whispered, her voice thick with tears.

Colin leapt to his feet and embraced Bracha, then stooped to hug Abel as well. “Well, OK,” he said, his own voice trembling. “I think we’re all done with the crying and hugging.”

“Not quite yet, Mr. Bossy-Boots,” Jessica said, rising to her feet. “If I’m a member of this family then I get my say too.”

Colin moved to her side and bowed low. “Ms. Jessica,” he said, “you have the floor.”

Jessica took his arm. “I’ve watched these boys grow up,” she said, lifting her glass to Joshua and Abel. “I’ve watched this family move beyond a painful past, into a new and happier future. I’ve been friend, caretaker, cook, housekeeper, shoulder-to-cry-on, and keeper of the spankin’-stick.” At this both Joshua and Able burst into laughter.

“And I want to say today that I’m thankful to have been a part of their journey.” She paused, then turned and gazed up at Colin. “He was a sad and lonely boy,” she said, her voice low. “His mother and brother tried, but he kept all of us at arm’s length.” She stood on tip-toe and kissed Colin’s cheek. “He’s a happy man now thanks to your Irish ways and your loving heart. And I thank you.”

Colin hugged her then swiped a sleeve across his damp cheeks. “OK. Are we done now because I’m hungry!”

“Not quite yet,” Joshua said, getting to his feet.

“Get over there with your Irish ass,” she teased, shoving him toward Joshua.

Joshua nodded and kissed him, resting his hand for a moment on Colin’s cheek. “I just want to say this,” he said, lifting his glass. “I am the happiest man on Earth,” he said. “Not just because of him…,” and here he tilted his head toward Colin. “But because of all of you as well.” He lifted his glass. “L’Chaim,” he said. “To life. To all of our lives. To family.”

All at the table returned Joshua’s toast, then Colin pulled him down into his chair. “OK,” he said, “that’s IT! No more emotional toasts. Let’s get this craic going!!”

Joshua leaned against him and kissed his cheek. “Happy Thanksgiving, my yedid.” (Beloved)

Colin gazed into his eyes for a moment, then kissed him tenderly. “Happy Thanksgiving, a chroí.” (My heart)