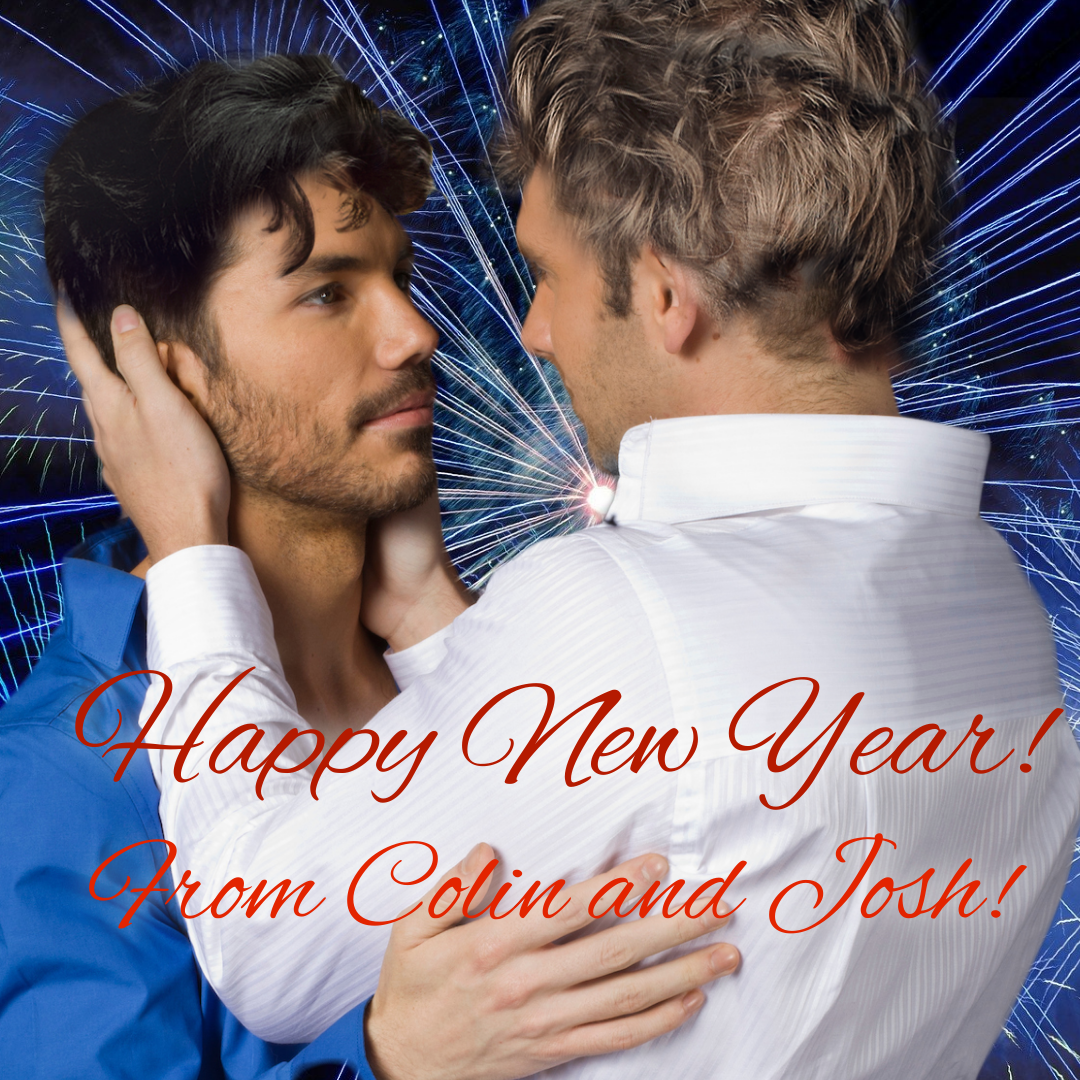 Colin wandered in from the kitchen munching on an apple. He was wearing his workout clothes which consisted of very tight shorts and a raggedy T-shirt. And he was drenched in sweat.  “What’re you doing?” he asked Joshua who was sitting on the couch bent over his iPad.

“Wordle,” Joshua told him. “I’m trying to beat David which is goddamned hard to do!”

“No. The professor just has a brilliant mind.”

“Well so do you,” Colin informed him. He dropped into an easy chair across from where Joshua sat and stretched out his legs. “What’s the plan for tonight?”

“We’re meeting the guys at McCafferty’s,” Joshua told him, then glanced up with a quick grin. “Got it in four!”

Colin rolled his eyes and laughed. “Well, honey, I’m thrilled for you. How did David do?”

“Don’t know yet,” Joshua told him. He messaged David his Wordle score then shook his fist at the iPad. “Beat it, Professor!”

Colin laughed again. “Jeez, you guys take your Wordle way too seriously! Are we having dinner there?”

“McCafferty’s!” Colin blurted out. “Where’s your head at, bud?”

“Oh! Sorry, babe. Yeah, I guess so. Well, we are because I didn’t plan a damned thing for dinner tonight.” He eyed his husband. “I assume you’re on your way to the shower.”

“Nah,” Colin drawled out. “Thought I’d celebrate New Year’s Eve smelling like a goat.” He winked at Joshua. “You don’t mind that do you? I thought you loved the smell of my sweat!”

“After we make love, yeah. I do. But this sweat…” and here he paused to sniff the air. “Has a totally different… um… aroma.”

Colin rolled his eyes and got to his feet. “Yes, I’m on my way to the shower.” He tossed his apple core to Joshua who caught it in one hand.

“We’re meeting them at seven,” he said, then shot a quick glance at his watch. “And you’d better lay out your suit. It’s nearly six now.”

“What?!” Colin blurted, spinning to face his husband, one hand on the railing. “A suit? C’mon, Josh!”

“I wear a suit every damned day!”

“I know. I watch you walk out the door in one every damned day looking hot as all bloody hell!”

Colin turned and started up the stairs, grinding out a disgusted sigh. “Jesus! Gotta wear a freaking suit on my one day off!”

Joshua gave a soft chuckle. “I said…,” he called out, moving to the bottom of the stairs “… that I like seeing you in your suit.”

Colin grinned down at him. “You see me in one every damned day!”

“Maybe,” Joshua told him. “But every damned day you’re wearing it for court, not for me!” He heard Colin laugh in response, then the bathroom door closed and a moment later he heard water running and Colin’s voice lifted in song.

Sunday morning just at nine
Dan McGinty dressed so fine,
Stood looking at a very high stone wall,
When his friend, young Pat McCann,
Says, “I’ll bet five dollars, Dan,
I could carry you to the top without a fall.

Joshua stood at the foot of the stairs looking up and listening. He felt hot tears burn his eyes and smiled. God, I love hearing him sing, he thought, knowing that’s what brought the tears and the ache in his throat. It’s the heart and soul of why I love him the way I do. He drew in a shaky breath and turned away and fell back onto the couch.

Colin was still in the bathroom when Joshua climbed the stairs to their bedroom and began to lay out his clothes. He draped his dark suit over his arm and ran his hand across the fabric in a loving caress. He had worn this suit on the day of their wedding and it remained as precious to him as the memory of that day. He gathered the rest of his clothes and carried them all downstairs to the half-bath where he shaved and donned his dress slacks and shirt. Satisfied with how he looked, he draped his dark tie around his neck then walked back to the living room, his jacket over his arm.

He heard the bathroom door open, followed by the sound of Colin’s footsteps coming down the stairs. He tossed his jacket onto the couch and turned to face him.

Colin stepped off the bottom step, brushing invisible lint off the sleeve of his black suit jacket. His thick, sandy hair was half-combed into place, but still tousled, as if refusing to obey its owners wishes. As always, his suit hung perfectly over his broad shoulders, giving him the aura of authority and power that had always left Joshua breathless, and that left him breathless now.

“Lord god,” he whispered, standing at the end of the couch staring at the man he had married… the man who had married him while they both wore these same dark suits. For a moment he felt transported, mesmerized, almost unable to believe what he knew to be real and true. This man was his. His husband. His partner. His for the rest of his life.

“My god you are so incredibly handsome,” he said at last, his voice a rasp in his throat.

Colin glanced up at him, his hand still poised over the sleeve of his suit jacket and the smile that broke over his handsome Irish face brought the hot sting of tears back into Joshua’s eyes. “Well, thank you, my love, my beautiful Jewish boy.” He walked to Joshua’s side and with one swift movement, pulled him against his body and kissed him with hungry passion.

“It’s the last day of the old year,” Colin murmured, rocking Joshua against his body. “So let me say this now, let me end the year with this.” He gazed into Joshua’s eyes until he saw the tears that burned there spill onto his cheeks. “I love you,” Colin murmured, his voice low, filled with rough emotion, raw with honesty as he bared his soul to the man he loved. “I love you with everything that I am and everything I will ever be. And with every beat of my Irish heart I love you more.” He pressed his lips to Joshua’s ear. “Joshua Samuel Campbell-Abrams, beloved of my heart, I… love you!And I always will.”

Joshua tried to answer, but the words would not come. He bowed his head until his forehead pressed to his husband’s chest and sobbed, drawing in a long breath that shuddered and trembled in his chest. When he lifted his eyes to meet Colin’s his face was streaked with tears.

“I know,” Colin whispered. “You feel the same.”

“I do,” Joshua choked out. “With all my heart I do, my beloved, hanasikh shelik.”

“And when midnight hits and the new year arrives I’ll say the same thing. I’ll make the same vow. With all my heart.”

“As will I,” Joshua said, reaching to caress Colin’s cheek. “This year and every year.”

“And so, my handsome husband, shall we go meet our friends and bring in the new year with Irish Stout and vows of undying love?”

“And maybe an Irish folk song or two?”

“Whatever you want, my darling,” Colin murmured then kissed him again, his honeyed-green eyes shining. “If you want me to sing… I’ll sing for you.”

“Then let’s go!” Colin urged. He grabbed Joshua’s jacket and helped him into it, then flipped his loose tie with a finger. “Gonna fix that?”

“Once we get there,” Joshua said. He slid his arms into his overcoat then linked his arm with Colin’s. “Ready, my love?”

“Ready, my darling.” He bent and kissed Joshua’s cheek, then waved him through the door and onto their porch. “Happy New Year.”

“Shana tova,” Joshua told him in reply, keeping their arms linked as, together, they strode down the sidewalk and toward Colin’s car.