NOW’S YOUR CHANCE!
Grab all three books in the best selling
Revolutionary Heart series at one low price!⁣⁣

⁣Jan Jarrell’s ”Revolutionary Heart” is one of my favorite series, each installment better than the previous one. ”⁣⁣

⁣⁣“I so love this series!! I can’t get enough of Colin and Josh!! These characters feel like family and I want more!! ⁣” 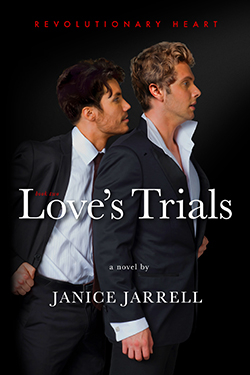 Love’s Trials – Charlottesville and the ‘Unite the Right’ riots.

August 12, 2017 was a momentous day in Charlottesville, Virginia. It was the day that the ‘Unite the Right’ protestors marched their way into history. It was also a day that left most of American feeling disgusted, repulsed and angry.

But for the characters in ‘Love’s Trials’ the ‘Unite the Right’ protest was more than a social or political event. They weren’t simply spectators to the terrible events of that day, they were participants. It was a moment in their lives when they were forced to face some of their most deeply felt prejudices, prejudices rooted in racial and personal memories too profoundly painful to ignore. It was a day when they feared for the safety of the ones they love most. And it was a day of responsibility, duty, and service.

Love’s Magic is set in Charlottesville. Much of the Love’s Magic storyline revolves around the University of Virginia and the politics which are a fundamental part any organization as large as a top tier college. Love’s Trials is set in the same locale and features many of the same characters. Consequently, when the ‘Unite the Right’ protests took place in Charlottesville it was simply impossible for me to ignore an incident which was so fundamentally important to our nation’s history and to the lives of the men who inhabit Love’s Trials’ world. It simply had to be part of the storyline.

Colin, as a Sergeant with the University of Virginia campus police force, would be involved in this conflict as a professional law enforcement officer whose duty was to keep the peace to the best of his ability. But at the same time, because he is deeply in love with a Jewish man, he could not remain indifferent to the vile anti-Semitic tone of the ‘Unite the Right’ protestors. Joshua would experience this incident on an intensely personal level, both because the involvement of the neo-Nazi’s awakened deeply-held historical and family memories and because the man he loves is involved in every aspect of this conflict, a conflict which places him in constant danger.

Knowing Colin as well as I do, I knew that he would not only take great offense at the anti-Semitic rhetoric the Nazi’s were spewing on that day, he would also be frothing at the mouth with anger. One of the things he loves most about Joshua is his Jewish heritage. He believes that the deep reservoir of inner strength which he has always loved and counted on within Joshua flows from that genetic, spiritual source. Hearing the Nazi’s hate-filled, anti-Semitic chants would have set his Irish heart on fire with rage.

At the same time, I knew Colin would be required to remain in control of his emotions. Certainly, he would have longed to batter the Nazis to a pulp. But it’s not Colin’s way to use physical force no matter how angry he might be. He is experienced enough at his job to know that such a reaction would solve nothing. Responding with undue force would certainly have provoked a response from the supremacists in which innocent people could have been hurt. He had to try to stay calm. He had to try to react in a professional manner. He didn’t always succeed.

In Love’s Trials you’ll hear Colin talk about the day of the “Unite the Right’ riots. He’ll discuss what he saw and heard. He’ll discuss about how he responded. He’ll discuss how he felt. And he’ll discuss his thoughts on how well he feels the police force, whose job it is to protect Charlottesville citizens, responded to the dramatic events of that momentous day. However, although he was at the center of every incident which took place in Charlottesville on August 12th, 2017, those events remained very much out of his control. His point of view with regard to this emotionally charged day in his professional life is both personal and deeply felt, but he would certainly never claim that they were unbiased. Colin is at heart a deeply honest man. And as such he would be the first to admit that no one who was present at the “Unite the Right” riots that day could have been less biased than he.

Joshua’s point of view regarding that terrible day was also deeply personal. As a Jewish man who lost family members in the Holocaust, he possessed a unique perspective regarding the ‘Unite the Right’ march in Charlottesville. He overwhelmed with disgust and anger that the neo-Nazis had been allowed to march in his city in the first place, and his first instinct was to join the counter protestors and face down the white-supremacists. At the same time, he knew that his presence at the event would make it impossible for Colin to concentrate on his job. Colin’s concern for Joshua’s safety would have been a distraction which could easily have gotten him injured or even killed.

It was a dangerous situation for everyone involved and Joshua had to make a hard decision. Would he join the counter protestors? Or would he stay home in safety. His desire to be part of what happened that day was fueled by his genetic revulsion for anything connected with the Nazis. The grandfather who nearly raised him had been imprisoned in the camps. Both great grandparents had been Holocaust victims along with many, many other family members. And yet his presence at that ugly event would have placed the man he loved in danger, and Colin had made it clear he was vehemently opposed to Joshua being anywhere near the gathering. Any decision Joshua made meant facing a trial that could possibly change their lives forever.

They both made decisions on that fateful day that altered their feelings about their relationship and about themselves. Colin had been a police officer for a decade but he had never before faced a situation where he was confronted with hatred and bigotry this vicious which also posed a very real threat to the one he loved. Joshua had never before faced a situation which forced him to appreciate and accept how deeply connected he was with his Jewish heritage.

In the end, they both made decisions that would affect they way the lived their lives from that point forward. I won’t share all the details either of that day or of what came afterward for Colin and Joshua. I don’t want to ‘spoil’ you for the dramatic events that take place in Love’s Trials. But I can say this: While this incident doesn’t even begin to scratch the surface of what they’re go through in this book, it does lay a foundation of love and faith in each other that they will certainly need in the days ahead. And it is a profound chapter in what I hope you’ll feel is a profound story.

Love’s Trials is available on Amazon and in Kindle Unlimited and ALSO available in audio format on Audible, narrated by the amazing Walker Williams! Colin and Joshua face many trials in the course of this book, the ‘Unite the Right’ protest being only one. And when the trial is deadly enough, love can lose its way.