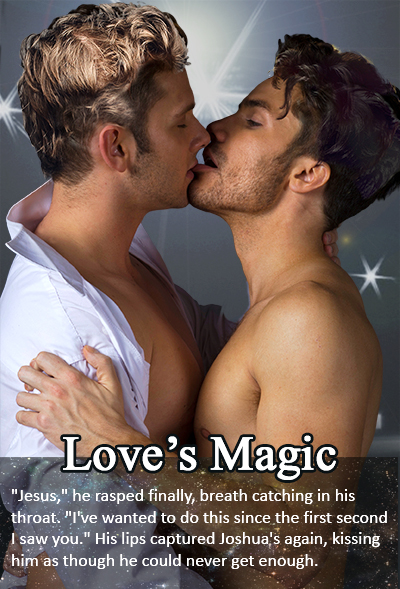 An interviewer asked me this: Tell me one thing hardly anyone knows about you.

Well, the first thing that comes to mind is that I spent 15 years reading Tarot cards and doing Astrological horoscopes for a living. Not only that, but I taught the very first online Tarot class in the history of the world and this was loooong before the Internet. It was on a service known as Quantum-Line, or Q-link which was the precursor to AOL. I taught classes there, led full moon meditations. It was great, GREAT fun!

And it was the beginning of what is now, of course, a world-wide phenomenon, the WEB. It was more fun back then because we were involved in ground-breaking activities and making our own rules up as we went… always MY favorite thing to do.

I enjoyed reading Tarot cards. I never saw them as a way to tell fortunes or predict the future. I used them much as a psychologist (Joshua?) would use ink-blots. They’re a great psychological tool, and a lot of fun. 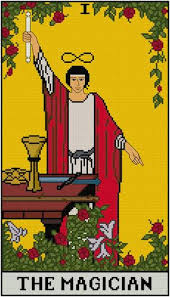 I’ve always seen the Magician as the card meant for authors. The Magician lifts his wand toward the skies to call on inspiration and then uses the tools he has been given to make that inspiration manifest in the world. This is what authors do all the time. Even those authors who have yet to sell even one book have created something magical. They have drawn on the power of the Universe and manifested that power on Earth. I don’t care if it’s a children’s book, a cookbook, or a contemporary gay romance novel like mine… they are all a manifestation of what is most divine within each of us. 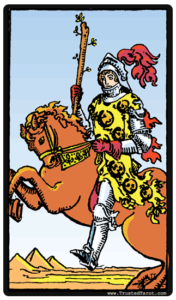 Colin’s card would have to be the Knight of Wands. Wands represents the element of fire, and I don’t think anyone would dispute me when I say that Colin is a man who overflows with fiery dynamism. He is the poster boy for primal energy, inspiration, and just plain life force. He’s enthusiastic and courageous. If you wanted to ‘light a fire under’ someone, Colin would be the perfect guy for the job. And as a Knight of Wands he wields that fire as any gallant Knight would… with courage, passion, and in a way that inspires all of us. Joshua likens Colin to Don Quixote since Colin’s quest in life, at least as Joshua sees it, is to defend the helpless and destroy the wicked. But for Colin it’s more than a quest, it’s the driving force of his life. The Knight of Wands is not someone who could ever back down or take a back seat to anyone. He’s at the forefront of every battle and in the thick of any conflict where his ideals are being challenged. Look at him holding the reins, totally in control of the wildly rearing animal with only one hand. And you can bet he makes sure there’s an audience there watching him do it. The Knight of Wands is a showoff!! He likes attention and applause.

I’ll also add that Colin absolutely sizzles with sexual heat. As Joshua noted from the moment they first met, Colin smolders with an almost dangerously seductive quality that makes him nearly impossible to resist. His is ever the ‘knight in shining armor’ charging off to meet whatever danger or challenge is foolish enough to cross his path.

The Knight of Wands will be your champion. But he can also be the chaotic force that dances through your life, leaving a tangled chaotic mess behind him. He’s a force to reckon with. Just ask Joshua. 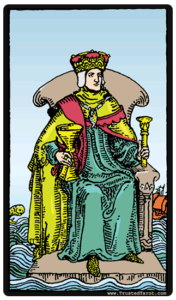 I see Joshua as the King of Cups a card symbolized by the element of water. Emotional, healing, and always led by love, this card truly represents the rulership of the heart. But at the same time, he is a King and represents authority and responsibility. In this case, the King can feel responsible for the emotions of others and also be very much in tune with what others are feeling. This emphatic nature helps Joshua understand Colin better than Colin understands himself. During their very first get-together in Love’s Magic Joshua startles Colin by speaking with complete understanding about Colin’s most deeply held secret. See this excerpt:

“One of the greatest, I suspect,” Joshua replied.

Colin looked at him thoughtfully. “I’m afraid I may end up disappointing you, Josh. I’m really not all that noble.”

Joshua frowned and shook his head. “I disagree. There is something innately noble about you, Colin. Something beyond the ordinary. You’re not just a cop doing a job. It’s somehow greater than that.” He drew in a deep breath and when he spoke again his voice was low and warm with meaning. “I was serious when I compared you to Don Quixote. You seem to view your work as a personal mission. A way to right some terrible wrong. Like a knight on a noble quest.”

For a moment there was silence.

Joshua’s eyes dropped. “That’s what I see when I look at you, Colin,” he said. “A knight on a noble quest.” He lifted his head and met Colin’s eyes. “And, yeah. I know I sound like a hopeless romantic.”

Momentarily speechless, Colin’s stared at him, his heart stuttering in his chest, his honeyed-green eyes wide with surprise. Joshua knew no more about Colin than any other causal relationship in his life. And yet, without even realizing it, he had just spoken with eloquence and hair-raising accuracy of the most deeply hidden truth in Colin’s heart. “You’re…” Colin hesitated then drew in a quick breath, “…you’re damned insightful, Joshua.”

Joshua’s empathetic nature makes him a natural as a psychologist. And yet the King of Cups can often find that understanding his own emotions is a much greater challenge than understanding the feelings of others. Joshua suffered severe emotional and physical abuse as a child and the roiling waters of his emotions reflect the pain of those early years. Joshua still struggles to understand and overcome the damage done by those difficult years in his life. The King of Cups can be very introverted. He can internalize his feelings and find it difficult to trust others enough to establish real emotional intimacy.

Joshua’s King of Cups can sit on a very lonely throne. He can isolate himself to the point where it becomes difficult to reach out to others. And he can be totally prepared to flee at a moment’s notice when he suspects betrayal or abandonment may lie ahead. Joshua ran away from Colin after their first fight, convinced that offering his love to his magical Knight of Wands was a hopeless flight of fancy. It wasn’t that he didn’t believe in Colin. He didn’t believe in himself.

Colin, as Joshua’s ‘Knight in shining armor’ helps him find healing and peace but only after they both face the inner demons symbolized by their Tarot card. Colin must lay aside his devotion to ‘self-image’ and allow himself to be vulnerable enough to go after Joshua and seek his forgiveness. The cool, healing waters of Joshua’s presence quench the fires of Colin’s inner Knight.

Joshua must forget his childhood fears enough to trust in Colin’s love. He must lay aside the lack of self-worth he was taught in his childhood and come to believe that he deserves the love of the Knight and champion who has swept him off his feet.

Understanding the meaning of their Tarot card gives me insight into the motivation, goals, and needs of my characters! And… it’s a fun way to relax when I’ve spent too much time bending over the computer, writing!!

What Tarot Card do you think best represents YOU?

Want sneak peeks at new Janice Jarrell projects? How about deleted scenes, alternate endings, early drafts, book release details, and exclusive giveaways? Join our VIP group, Jan’s Jazzy Jammers, for a behind the scenes look at all of this and more!