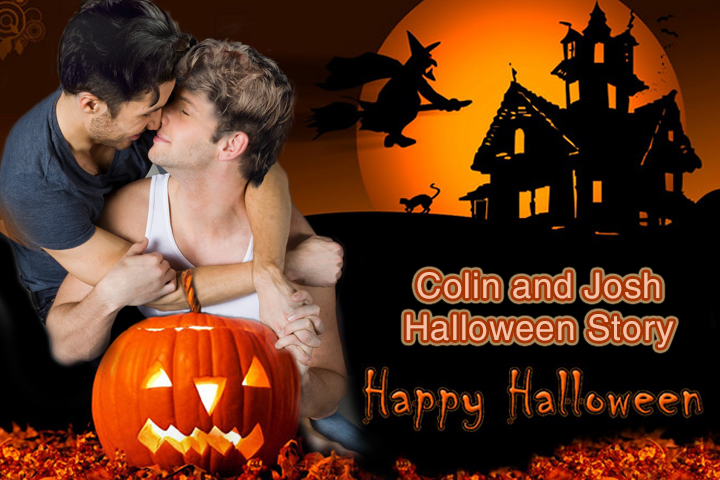 Joshua clutched Colin’s shoulders in an iron grip. “Colin! Oh fuck! God!” He desperately gulped down air as his orgasm repeatedly ripped through him, jolting every nerve ending, and sending electric thrills of heart-pounding bliss throughout his body.

“Josh,” Colin moaned, shuddering in a mindless ecstasy that matched Joshua’s in its intensity. “Oh, God, baby, so good. So perfect.”

For a long time they lay together, gasping for breath, feeling each other slowly relaxing, molded against each other’s hot, sweaty body.

“Jesus, Colin,” Joshua murmured finally, “that was fucking incredible! You been practicing or something?”

Colin chuckled, burying his face against the damp skin of Joshua’s throat. “All I do is get in bed with you and let nature take its course.”

Joshua gave a low moan as Colin’s now-flaccid cock slid slowly out of his body, and then he wriggled a bit to ease the pressure of Colin’s weight.

“No. Not yet.” He tightened his arms around Colin’s neck, holding him close, shutting his eyes to better savor the warm, comforting weight of Colin’s body. He smiled and slid his fingers through Colin’s unruly curls, wriggling again. “I like how you feel, but, OK. Now you can move. I need to cool off.”

Colin slid slowly off Joshua’s body and half turned to reach toward the bedside table. When he turned back to Joshua, he had a towel in one hand. “Clean up, sir?” he asked with a grin.

“Love it!” Joshua replied, laughing as Colin dabbed at his naked body with the towel, eagerly blotting up all traces of semen and sweat. “What’s this? I don’t usually get this kind of service.” The towel was soft, and Colin slid it, tenderly, over his body, then used the other end to wipe at himself before tossing it to the floor.

“Now,” he said, grinning down at Joshua. “It’s time for a Halloween treat.

“Next year we should dress up,” Colin said, bending over him.

“No,” Colin said, shaking his head. “Though, I do have some ideas about that.” He placed something on Joshua’s chest.

“What’s that?” Josh asked, lifting his head to peer down. “What did you put on me?” Then, spotting the small item, he burst into laughter. “Oh my god, Colin!” A piece of candy corn was resting close to his nipple. “Please tell me you didn’t steal that from Sarah and Deborah’s Halloween bags!”

“I’ll have you know,” Colin said, faking an offended tone, “that I did not steal Halloween candy from David’s daughters. I bought this candy corn myself especially for this occasion.” He bent and ate the candy from Josh’s chest, his wet tongue gliding across Joshua’s nipple many more times than was necessary to accomplish his task.” Mmmmm,” he sighed. “So good! This is just heaven.”

“You,” Joshua observed sadly, “are totally bat-shit crazy. Do you know that?”

“Really?” Colin said, laying a piece of candy a bit lower on Josh’s chest. “You think so?” He bent and licked the treat from Joshua’s smooth, olive skin.

Josh shivered a bit as Colin’s tongue caressed his chest. “Well,” he admitted finally, “I have to admit, this feels pretty damned good.” He sighed, closing his eyes, then abruptly opened them again. “Hey, what ‘thoughts’ did you have about Halloween costumes?”

Another piece of candy corn landed on Josh’s body. This time the sweet treat fell right next to his navel.

“Mmmm,” Colin hummed appreciatively. “Now that’s a beautiful sight.” He bent and licked the candy into his mouth. Then, unable to resist, he swirled his tongue around Joshua’s navel.

“Mmmm, yourself,” Josh moaned in response, feeling his dick begin to respond to the moist caress of Colin’s lips and tongue. “Costumes, Colin?” he said finally. “Your thoughts on costumes? And if you put one of those on my dick I’ll…” his voice trailed away leaving his threat unfinished.

“Well,” Colin said, placing another piece of candy corn on the crease where Josh’s leg met his body. “What I visualize is this.” He lifted his hand and moved it across thin air as if setting a stage. “YOU,” he said dramatically, “dressed as a slave boy.”

“A red leather thong firmly in place,” Colin continued, staring into space as he described his vision. “The straps of leather attached to the thong are wrapped – seductively wrapped mind you – ” he added, “around your thighs.”

Joshua screamed with laughter as Colin lowered his head and licked up the candy leaving a wet trail on Joshua’s thigh.

Then he lifted his head and continued: “A matching red leather harness is twined around your chest, extremely hot, and yet…” he inhaled and paused for effect “tasteful. It displays your pectoral muscles and nipples in a daring peek-a-boo manner, guaranteed – guaranteed mind you – ” he said soberly, waving a forefinger in front of Josh’s face for emphasis… “to make a grown man – who would be me – ” he added in a stage-whisper, pointing to himself, “positively weep with joy.”

“And,” Colin continued, seemingly unaffected by Josh’s shrieks of mirth, “around your neck is a gold collar to which is attached…” he paused for emphasis. “…a red leash.”

“I do say,” Colin continued. “And I’ll bet you can’t imagine who is holding that leash!” He paused and peered down at Joshua, eyebrows raised questioningly. “Care to venture a guess?”

“Would that be…” Josh paused and rolled his eyes, as if thinking the question over, “… YOU, perhaps?”

“Me, indeed!” Colin replied. “And may I say you are VERY intelligent for a slave boy.”

“And how are you dressed, Colin?” Joshua asked him, grinning from ear to ear. “Or should I refer to you as master?”

“Not until you’re wearing the costume,” Colin informed him. “Me? How am I dressed?”

“Well,” Colin said conversationally, leaning on his arm as he stretched out next to Joshua, “as you might expect, I’m dressed entirely in black leather.”

“Looking ever so hot!” Joshua added.

Colin laughed. “But of course!” he said, laying another candy corn on Joshua’s belly. “You know I always look hot in leather.” He dipped his head to lick the candy corn from Joshua’s body.

Joshua wrapped an arm around Colin’s neck and tugged him closer until their bodies were once again molded together. “It’s one of the very first things I noticed about you,” he murmured seductively. “That you look hot as fuck in leather.” He captured Colin’s lips in a long, lingering kiss.

Colin returned his kiss, snuggling closer. “Mmmm…” he moaned. “This is heaven.”

“I thought you said eating candy corn off my body was heaven,” Joshua reminded him, still grinning.

“Anything that has to do with your naked body is heaven,” Colin replied.

“You got any more of that candy corn?” Joshua asked, trying to peer over Colin’s shoulder toward the bedside table. “You’ve been hogging it. And what’s in that huge bag you brought in with you tonight? You shoved it into the fridge before I had a chance to peek at it.”

Colin turned and plunged his hand into a small, brown bag that sat on the nearby table. It immediately emerged filled with candy corn. “Here you go,” he said, pouring half the candy into Joshua’s hand and then popping a few into his mouth. “Far as the bag goes it’s got more candy, a quart of cider that’s just dying to be heated up in the microwave, a pumpkin pie with whipped cream for the top, aaaannnd,” he drawled, “… a DVD!”

“BWAAA HAAA HAAA!” Colin fake-laughed “I stopped and borrowed it from Jeff! It’s The Thiiiiiiing!”

“Brilliant!” Joshua exclaimed. “You are the perfect Halloween date!”

“Then later, maybe, we’ll have hot cider and pumpkin pie with whipped cream.”

“And when we do,” Joshua said, nuzzling Colin’s cheek, “I’ll have something interesting to lick off your body!”

Colin snickered. “I’m willing to bet that I’d be totally …” he inhaled deeply and waggled his eyebrows in a wickedly suggestive manner, “up for that activity.”

“I wouldn’t be the least bit surprised,” Joshua said, grinning. “And hey,” he added in a softer voice, “Happy Halloween, baby. And thanks. You always make me feel so special.”

“That’s because you are special.” He returned Joshua’s kiss and smiled. And besides, I love you, my little Jewish slave boy. Now let’s go watch The THING!’

Joshua grabbed the candy bag and, cackling like a couple of witches hovering over a boiling caldron, they dashed downstairs to the living room where pie, whipped cream and ‘The Thing’ waited.