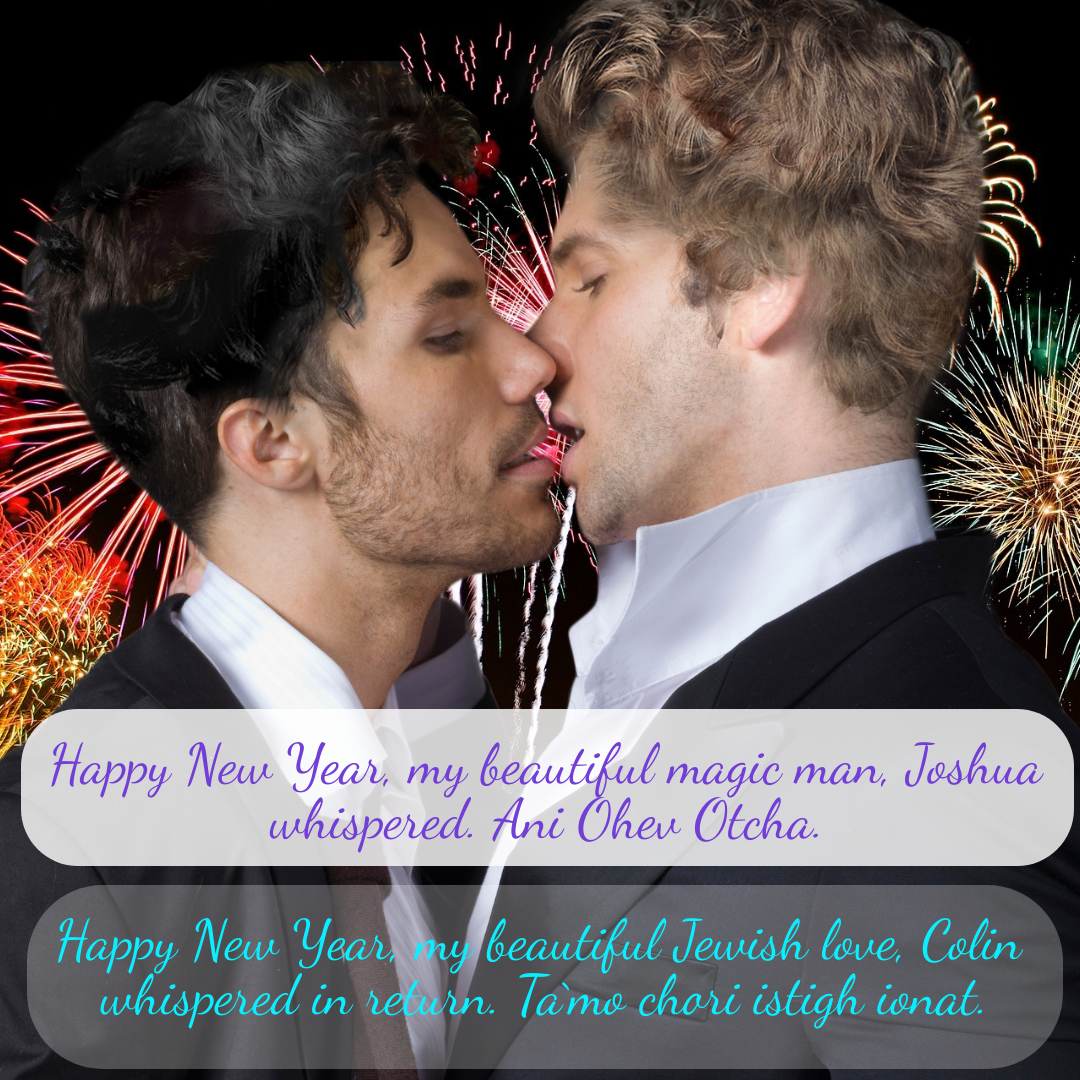 They were approaching a New Year’s Eve unlike any other. Parties were out of the question, as was the chance to join their friends at McCafferty’s for a repeat of last year’s joyous New Year’s Eve celebration.

This was the year of COVID-19 and get togethers of any kind were something Colin would not even discuss, let alone consider. “We’re not sticking our noses outside that door for anything that’s not absolutely necessary,” he told Joshua as he sat at their kitchen table munching toast. “We can Zoom David and Nate at some point just to see how they’re doing. But you and I are staying home!”

Joshua nodded but didn’t respond. He stood staring out the kitchen window that led to their small backyard, both hands resting on the sink.

“Good god, no,” Joshua said, turning to face his husband. “It’s blind luck that we haven’t caught this horrible bug already. And this close to a vaccine… there’s no way I’m taking any chances.” His head dropped and for a moment he stared silently at the floor. “But it’s sad.”

“Well…,” Colin drawled out. “I tend to agree but…,” He paused and grinned at Joshua, flashing his deep dimples. “I promise to make your New Year’s Eve uhhhh…,” he smirked and arched an eyebrow, “… memorable.”

“This whole year has been memorable.”

“But not memorable for the right reasons,” Colin grumbled. “And not nearly as memorable as I plan to make your New Year’s Eve.”

Joshua lifted his head and smiled. “Of that I have absolutely no doubt.” He stepped to the table and sat down next to Colin. “And I’m totally happy to spend New Year’s Eve with you, just the two of us together. In fact, I prefer it. But I know you like celebrating with our friends.”

“I’m happy celebrating with you,” Colin said. He leaned toward Joshua and reached to take his hand. “But this has been a shit year,” he said. “I’ll be glad to see it end. And you’re right. Given our work with the public, plus David and Nate catching this goddamn thing, we’re lucky we got through it unscathed.”

“What was your best moment this year?”

Colin paused, considering, then scowled. “Not many come to mind,” he muttered. “We’ve spent so much time sitting in front of the TV that my eyes have started to glaze over.” He shot a glance at Joshua. “It’s all merged into one long, unending stream.” He scowled down at their joined hands. “Supernatural has started to melt into NCIS until I can’t tell the difference between Dean Winchester and Special Agent Gibbs.” He sighed and shifted in his chair. “We aren’t getting out all that much, and when we are, we’re usually running errands for David and Nate or dashing to the store at five in the morning to beat the mask-less assholes to the last roll of toilet paper.”

Joshua’s lips curved in a hint of a smile. “Now you know damned well that people are masking up a lot more these days. And we’ve got enough toilet paper in the pantry to last ‘til the next pandemic. How much did you think we’d need anyway? You must have bought out every store in Charlottesville.”

“Well, I don’t know about you, but the whole world knows that I’m full of shit!”

“Do you have a favorite moment from this past year?”

“Well for god’s sake don’t keep it to yourself!”

Joshua raised their joined hands to his lips and pressed a kiss to Colin’s knuckles. “We’re standing in David and Nate’s front yard,” he began. “Davy is standing in the bedroom window in his bathrobe with Nate beside him.” His eyes shifted to meet Colin’s, smiling in loving homage. “And you, my yedid, are standing in the snowy grass below with both hands jammed into your jacket pockets, singing ‘Fields of Athenry’ to them in the most beautiful voice I have ever heard.”

“You asked for my favorite moment and I gave it to you.”

“Well, thanks, babe. I appreciate it.”

“What’s more important is that David appreciated it. I’d bet it’s his favorite moment of the year too.”

Colin shrugged, brushing off the compliment.

“C’mon,” Joshua encouraged. “You can’t think of one good moment from this year? Not even getting your law degree?”

“Graduating in an online Zoom ceremony while sitting in our living room sort of sucked the ‘special’ out of it.”

“Not for me! Colin Michael Campbell: Juris Doctorate.”

“Campbell-Abrams,” Colin corrected. “Fat lot of good it’s done me. Can’t even take the bar exam ‘til all this COVID shit is over.”

“Gives you more time to study.”

“C’mon, baby,” Joshua begged, leaning toward him. “There has to be one moment this year that made you happy.”

He slumped in his chair and stared down at the table. “I don’t mean to sound all whiney, bud. You’re right. We’ve been incredibly lucky this year. But damn!! I wanted to dance with you on New Year’s Eve. I wanted to dress up in our fancy duds and drink champagne and kiss you at midnight and sing ‘Auld Lang Syne’.” He lifted his head, his face screwed into a self-deprecating grimace. “Sorry.”

“Don’t be sorry. It’s wonderful that you want that. I want it too.” He tightened his hold on Colin’s hand. “But Irish, we have a lifetime of New Year’s Eves ahead of us.”

Colin said nothing. His head dropped and he gazed at Joshua through lowered lashes.

“Let’s make it a great New Year’s Eve,” Joshua begged. He leaned toward Colin and batted his eyes. “I’ll get some Sufganiyot,” he promised, in a lilting voice.

“Offering my husband a treat so he’ll cheer up,” Joshua corrected.

“I’m not sure there are that many jellied doughnuts in all of Charlottesville.”

On New Year’s Eve Joshua cooked Colin’s favorite Jewish dish, Cous-Cous Royale, and topped it off with plenty of the deep-fried Sufganiyot Colin loved. Colin responded with compliments and a show of good cheer, but Joshua could tell he was still brooding over his lost hopes for their New Year’s Eve celebration.

They spent that evening watching TV in their underwear. Joshua tucked a warm blanket around them and snuggled against Colin’s side, laughing every time Colin stretched out his hand to pluck yet another jellied doughnut from the nearby platter. “You keep this up and you’ll have to start the new year with a diet!” But at a quarter after eleven, he rose and ambled toward the stairs. “Be right back.”

Colin nodded, his attention riveted to the TV screen, but when twenty minutes passed and Joshua hadn’t reappeared, he strode to the bottom of the steps and called: “Josh, getting close to midnight! What’re you doing?”

“Hang on,” Joshua called down, then seconds later he appeared at the top of the stairs. He was wearing the dark suit he wore on their wedding day. In his hands he carried what looked like a champagne bottle, and Colin’s black wedding-day suit. He descended the stairs and shoved the clothing into Colin’s hands “Get dressed,” he instructed, “while I start the music and put this on ice.”

Colin laughed. “Do I have to wear the tie?”

“No. Just the suit. You can put it on over your T-shirt if you like.”

Colin laughed again and slid his arms into a white dress shirt. “Nope. I’ll forgo the tie. I might even forgo the socks and shoes. But I’ll put on the shirt and suit.” He buttoned the shirt and drew on the suit pants and jacket. Then, as he tucked the shirt in, he watched Joshua heap ice around the champagne bucket and grab two glasses. “Think you’re pretty clever don’t you?” Colin accused, grinning.

Joshua turned to face him and pulled his cellphone from his pocket. “Clever enough to have created a Spotify playlist of our favorite songs.” He propped the phone on their mantle and as the first soft notes of ‘We Can Last Forever’ floated out over the room he held out his arms to his husband. “Care to dance, hot stuff?”

Colin took a step forward and wrapped Joshua in his arms. They danced with a slow, swaying motion, at times scarcely moving, at others spinning in dizzying circles as Colin twirled them around the room. Joshua’s eyes lifted and met his husband’s and he saw Colin smile, his emerald-green eyes glowing with a warmth and love that nearly took Joshua’s breath. His fingers slid into Colin’s sandy hair and clenched there as Colin bent and kissed him, molding their mouths together in a deep, sensual merging that Joshua wished could last forever.

Moments before midnight, Colin lifted Joshua’s chin and kissed him again. “Thank you, my love, my life,” he whispered. “You’ve made this New Year’s Eve more special than I would have believed possible.”

Joshua’s phone suddenly chimed out the ringtone that signaled that the new year had arrived, and Colin once again took his husband in his arms and as they danced, he crooned in his ear:

As always, his voice was rich and filled with the emotion of the moment and Joshua felt his eyes burn with tears of love and gratitude. “Thank you,” he whispered against Colin’s ear. They stood for a moment after the song ended, staring into each other’s eyes, then Colin bent and kissed him again.

“Are you kidding? You’re the one provided the perfect New Year’s Eve even after I was a whiney little bitch about it!”

“Love it,” Colin replied, leading Joshua to where the sparkling wine was waiting. Joshua filled their glasses, then Colin lifted his in salute. “To you, my sweet Jewish boy. And to every New Year’s Eve we’ll share for the rest of our lives.”

Joshua lifted his glass and touched it to Colin’s. “To us, my love. And to every adventure that awaits us in the year ahead.”

After they had sipped, Colin took Joshua’s glass and sat it alongside his on their liquor cabinet. “C’mon,” he murmured, his strong arm wrapped once more around Joshua’s waist. “I’m not done dancing. And then I do believe I promised you a memorable New Year’s Eve.” He tightened his arm and pressed Joshua’s body hard against his own. “And that’s one New Year’s resolution I have every intention of keeping.”